Chaudhary and Kumari: A Comparative study of post-operative results with different grades of diabetic retinopathy after phacoemulsification and small incision cataract surgery (SICS) [with various types of IOLs]

Purpose: The objective of this study is to look for post-operative complications after cataract surgery in patients with Diabetic Retinopathy.

Materials and Methods: Out of sixty patients, we took fifteen patients each from BDR, Pre-PDR, PDR and DR with maculopathy respectively and patients underwent SICS and phacoemulsification with implantation of IOLs. We looked for post-operative inflammation (aqueous flare, cells, pigment deposition on optic of IOL), incidence of posterior capsular opacification, progression of underlying diabetic retinopathy, incidence of cystoid macular edema and visual outcome.

Result: We observed that visual acuity after cataract surgery improves to >6/12 in 22%. No patient with BDR grade developed post-0perative uveitis. Maximum inflammation post-operatively was with PDR and pre-PDR was 26%. Cystoid macular edema developed in 26 (55%) patients.

Conclusion: Visual outcome improves in majority of eyes and was not dependent upon the surgical technique employed or the type of IOL implanted. Post- operative uveitis was maximum with PDR. Majority of patients with PDR developed cystoid macular edema. Progression of retinopathy and maculopathy represented the natural history of disease not upon the surgical technique employed.

With introduction of insulin as therapeutic management for DM it was no more a fatal disease for young diabetic patients. The medical care tough shifted upon managing the complications mainly vascular include cardiac and renal disease and diabetic retinopathy.

Cataract occur commonly in diabetic patient for which surgical intervention is required both for visual rehabilitation and visualization of fundus. Development of cataract and retinopathy are more frequent in diabetics depends both on age of the patient and duration of disease.

In this prospective study postoperative results after phacoemulsification with implantation of foldable acrylic hydrophobic IOL, conventional and SICS with modified or non-surface modified IOL, in patients with different grades of DR is compared.

Study was conducted after approval from Institutional review board. All procedures were carried out after obtaining consent from patient. Patients were categorized as BDR, Pre PDR, PDR and DR with maculopathy without other systemic or ocular diseases and fifteen patients was taken in each category respectively. Other non-operated eye was taken as control. These patients underwent cataract extraction by phacoemulsification or conventional or small incision cataract surgery (SICS) with implantation of IOLs (acrylic foldable, heparin surface modified and non-heparin surface modified). Detailed history, ophthalmological examination, general physical examination was carried out.

Surgery was performed by senior ophthalmic surgeons under local anesthesia. Mydriasis was achieved with tropicamide and phenylephrine drops instilled 3 times every 10-15 minutes before surgery. Povidine iodine (5%) was instilled in the conjunctival sac.

For performing Phacoemulsification two types of incision was made scleral, clear corneal and was grooved up to 1mm clear cornea using crescent knife. Entry was made with 3.2 keratome. Capsulorrhexis was done followed by hydrodissection and hydrodelineation. Mainly divide and conquer technique was used, by using irrigation/aspiration port epinucleus and cortical matter was removed followed by lens implantation and closure of wound. For performing SICS 5.5 mm straight incision was given 2 to 2.5 mm behind the limbus and 1mm clear corneal tunnel was made. Entry was made by 3.2 keratome, anterior chamber maintainer was introduced at 6 o’clock position. Capsulotomy with 26G bent needle was done followed by hydrodissection and nucleus prolapse into AC and then extraction of nucleus by using wire Vectis, phaco-sandwich technique, bluementhal technique. Simcoe cannula used for cortical washing. Rigid PMMA IOL was implanted.

Majority of patients of age group 51-60 and most of them were females. 15 patients from each group divided according to the status of DR as BDR, Pre proliferative, Proliferative and DR with maculopathy. Both surgical procedure was employed for every stage of retinopathy and three different types of IOL is implanted. Main per-operative complication were intra-operative miosis and pigment dispersion. Striate keratopathy mainly seen in patients with phacoemulsification, no dependence upon the stage of retinopathy, but iridocyclitis was the main immediate post-operative complication. Post-operative uveitis seen mainly in PDR patients with PMMA IOLs (50%). Acrylic and HSM IOLs had almost equal incidence of uveitis. Out of total 60 patients, in majority eyes (86%) visual acuity improved by 2 or more lines on Snellen’s chart. 21.6% patients had visual acuity batter than 6/12. None of the patients with PDR or DR with maculopathy had VA 6/12 or better. Incidence of cystoid macular edema increased as the stage of retinopathy increased. Mainly in PDR patients, CME was seen and that too when procedure employed was phacoemulsification. Posterior capsular opacification was mainly in patients with PMMA lens implantation. Though one case with PCO was also reported in acrylic IOL. After 6 months of follow up, PCIOL deposits was main complication seen. Two patients with vitreous hemorrhage also reported after 6 months of operation. Progression of retinopathy was seen in seven cases, BDR converting to Pre-PDR and Pre-PDR into PDR within 3 months post operatively.

Incidence of uveitis among cases 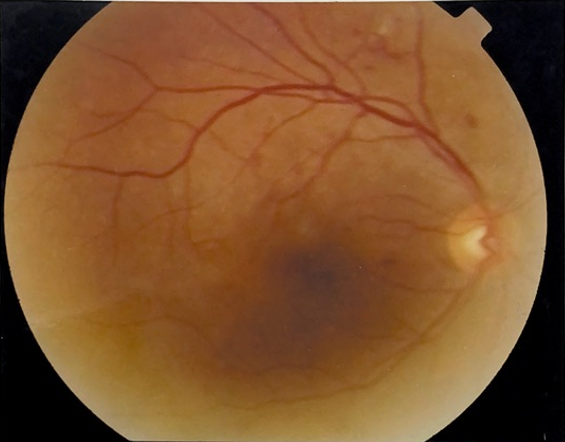 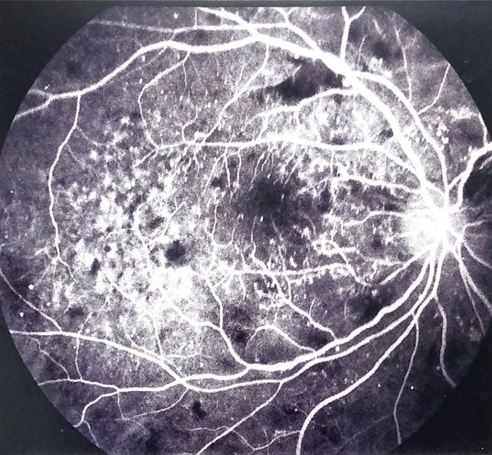 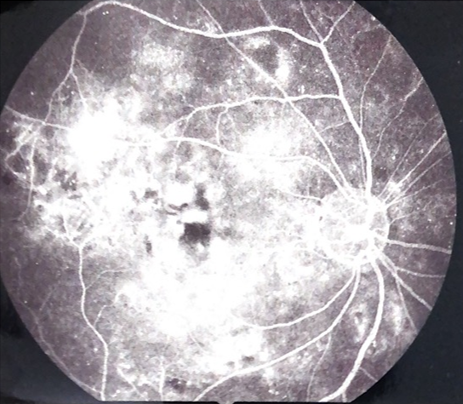 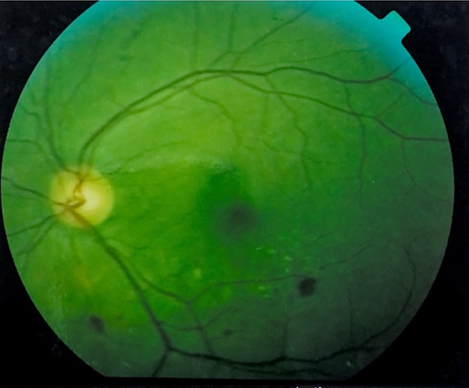 Cataract is a recognized complication of diabetes and it has been estimated that upto 20% of all cataract surgery is performed on diabetic patients. The 1997 guidelines of the Royal College of Ophthalmologists states that all form of diabetic retinopathy may become more severe following cataract surgery.

In this study we took patients with DR of various grades. Fifteen patients each from various grades, underwent cataract surgery using non-operated fellow eye as control. Different surgical techniques were employed and variety of IOLs implanted. Patients without diabetic retinopathy were excluded. The patients with PDR and particularly DR with maculopathy fared less. However, patients with maculopathy or severe retinopathy had valuable visual impairment after surgery and clear optical axis allowing adequate laser photocoagulation. In the study, visual acuity after cataract surgery was improved by two or more lines on snellen’s chart in majority of cases (86%). 21.6% patients had visual acuity better than 6/12.

Zaczek et al 3 prospectively studied the visual acuity after phacoemulsification. 41 diabetic eye (79%) achieved VA of 6/12 or better and 11 eyes (21%) had final VA lower than 6/12. Eyes with mild to moderate DR and CSME 1 week post-operatively had a lower final VA than those without CSME.

So, final VA depends upon the initial status of retinopathy and not on mode of surgery employed or type of IOL implanted, also VA is poor in patients with PDR, or DR with maculopathy.

We implanted HSM IOL in all groups of DR, 5 each in BDR, PDR, DR with maculopathy and 6 in Pre-PDR. Post-operative inflammation was less compared to PMMA IOL and equivalent to acrylic IOL in phacoemulsification. This result was equivalent to those given by katharina krepler et al4 gatinel D et al.5

Cunliffe et al 2 in his retrospective study shows that rubeosis iridis and neovascular glaucoma was common in diabetics while no case were reported in non-diabetic control.

Hykin et al 6 have reported that miosis and neovascular glaucoma is more common in PDR group as compared to no cases in BDR group.

The study was conducted to evaluate the visual outcome, the incidence of postoperative inflammation, CME and progression of retinopathy following cataract surgery (SICS and Phacoemulsification) in patients with various grades of diabetic retinopathy with implantation of various IOLs. A total of 60 patients with different grade of diabetic retinopathy was included. Visual outcome improves in majority of eyes and was not dependent upon the surgical technique employed or the type of IOL implanted. Visual acuity >6/12 in 22% of cases, in BDR (9 out of 15, 60%), Pre PDR (4 out of 15, 26%). PDR and DR with maculopathy did not attain visual acuity of >6/12. Post- operative uveitis was maximum with PDR. Majority of patients with PDR developed cystoid macular edema. Progression of retinopathy and maculopathy represented the natural history of disease not upon the surgical technique employed.