Naik and Vasu: Comparison of intralesional injection of triamcinolone - 40 mg/ml and Triamcinolone -10 mg/ml in treatment of chalazion

Aim: A prospective, randomised and comparative study to compare the efficacy and complications of triamcinolone acetonide (TMA)40mg/ml with TMA 10mg/ml in treatment of Chalazion.

Material and Methods: Sixty chalazion patients were randomly grouped into two groups. Group A patients received single intralesional injection of 0.2ml TMA 40mg/ml and group B 0.2ml of TMA 10mg/ml. The outcome and complications are evaluated at the end of 6 weeks.

Conclusion: Single dose of intralesional injection of higher concentration of TMA 40mg/ml is more effective than TMA 10mg/ml. However vision threatening complication of raised IOP and Aesthetical dissatisfaction due to yellow white deposit in the lid skin are the disadvantages. Glaucoma comprehensive eye examination and repeated counseling sessions in cosmetically anxious young female patients to be kept in mind.

Chalazion is a sterile chronic granulomatous inflammatory lesion of the meibomian gland or some time Zeiss gland caused by retained sebaceous secretion. It is believed to be from the blockage of the meibomian gland orifice or stagnation of the meibomian gland secretion. Persons who rub their eye frequently, patients with blepheritis and acne rosacea are more frequently develop chalazion .Common presentation is chronic swelling without any inflammatory symptoms or signs. However it may present as acute painfull swelling when secondarily infected.1, 2 Complications of chalazion are going to hordeolum internum following secondary infection,1 Cosmetic blemish, Astigmatism and mechanical ptosis3 and hyperopia.4 The commonest indication for chalazion treatment is cosmetic blemish.3

Advantages of intralesional TMA injections are simple outpatient department (OPD) procedure, no anesthesia injection requirement, minimal bleeding, no post procedure scarring, multiple chalazion can be treated at a time , easy to treat chalazion near punctual area and usefull in children and anxietic patients.2, 3 Many studies have been done on the efficacy and complications of TMA injection with various concentration and number of injections,6, 7, 13 comparing the response with size of the chalazion, 14 duration of the chalazion,5, 6 gender and between different age group.3 We have failed to find any literature on comparing the two concentration of triamcinolone (TMA) 40mg/ml and 10mg/ml in treatment of chalazion in journals, Medline and Pubmed on line search. This prospective and comparative study was taken to compare the efficacy and complications of two concentration of TMA 40mg/ml and 10mg/ml in treatment of chalazion.

This study was conducted at a secondary care Eye hospital in Chamrajanagara town in Karnataka state from August 2017 to January 2020. Patients who are reporting to Ophthalmology out patient deparment are enrolled. All patients were explained about the risk and benefit of the procedure and informed consent was taken. In case of minors and mentally disabled patients from surrogate parents. The study was approved by the review and ethics committee of the Hospital. Patients who have received TMA injection of any strength < 6 weeks before enrollment, having more than one chalazion in each eye and recurrent chalazion were excluded from the study.

Injection was given as described by Watson.et.al. 7 with following modification. 1. 4% Lignocaine hydrochloride topical anesthesia drop used 2. Insulin syringe with 27 G needle was used 3. 0.2 ml of non diluted TMA 40mg/ml and 10mg/ml was injected 4. In apprehensive patients skin route was used (2 cases in group A and 3 cases in group B). 5. Only one injection was given and the eye was paded for 30 minutes. Topical Gatifloxacin eye drop 4 times daily for a week and no other oral medicines used. Patients were re – examined at 1st week, 2nd,4th, and 6th weeks. During each visit subjective satisfaction on; resolution of chalazion and cosmetic blemish , size of the chalazion and IOP measurement (in risk patients). Cure was considered by subjective and objective observation at 6 weeks. Subjectviely: Aesthetically satisfied and objectively: reduced size of chalazion by 80% or size < 1mm size .

Recurrence was considered when the chalazion was palpable in the lid or measured more than 1 mm, patient felt there is visible or palpable swelling in the lid within the observation period.7 These failed cases were treated with surgical incision and curettage with one injection of 0.2ml non diluted 10mg/ml TMA. These cases were not included in success rate. The result after 6 weeks of follow up are tabulated and analyzed by 2020 Statistical Software (2020). NCSS, LLC. Kaysville, Utah, USA, and displayed in mean with standard deviation (SD). The probability by single sample student ‘t test and Fisher exact test and statistical significance with exact P value.

Overall success rate was 68.3 % (41/60) at the end of 6 weeks. Drop out rate was 8.3% (5/60) after 3 week follow up, 16.7% (10/60) had recurrence at 3 week follow up and 6.7% (4/60) had yellow white deposit in the eye lid skin even after 6 weeks follow up . Recurrence cases were treated with incision and curettage with one injection of 0.2ml of TMA 10mg/ml. Cumulative complication of 10% (6/60); yellow white deposit in the lid skin 6.7% (4/60) and raised IOP > 15 mmHg in 3.3% (2/60) were present at the end of 6 weeks. Patients with yellow white deposit are surgically removed and all four were not happy with the procedure. These 19 cases are excluded from the stastistical analysisis. Raised IOP >15 mmHg from base line in two pateints were treated with beta blocker. One patient IOP controlled to <21 mmHg after 6 weeks and another patients converted to steroid induced glaucoma.

Most of the patients in both group felt some tense sensation in the lid for 15 -30 minutes after injection. Complications like hypopigmentation of lid skin, corneal perforation, cataract, eye lid fat atrophy and posterior segment complications are not observed.

Showing demography, success rate and complication in total study group, group A and group B 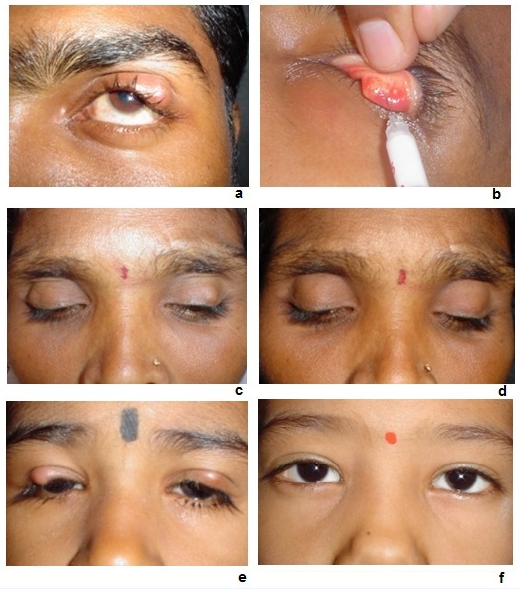 Depot steroid, Triamcinolone acetonide (TMA) has been widely used in many ophthalmic diseases and procedures. As intraoperative injection in external dacrycystorhinostomy, 15 intralesional injection in granulomas after endonasal dacrycystorhinostomy,16 as retrobulbar injection in management of non responding dysthyroid exophthalmos, 17 in management of diabetic macular oedema,18 for visualizing Vitreous during vitrectomy, 19 and in treatment of periocular scars.20 Depot steroid, TMA is a synthetic corticosteroid having 5 times anti-inflammatory action compare to hydrocortisone. It is a long acting anti-inflammatory, Anti Vascular endothelial growth factor (VEGF) and antifibrotic agent.21 Chalazions are composed with corticosteroid sensitive inflammatory cells and the chemical mediators. They cause inflammatory exudation and compress the lymphatic vessels. This leads to morphofunctional alteration in lymphatic vessels and granuloma formation in the lids. Presumed action of depot corticosteroid is by suppressing additional release of inflammatory cells and reduce exudation of plasma fluids. These factors may releases the compressive effect on the lymphatic and facilitate the lymphatic absorption of contents of chalazion. 22

First report on use of corticosteroid comes from Leinfeder, who used methyl prednisolone injection to reduce the inflammation of chalazion. The assumption was the chalazion becomes localized and easy for incision and curettage.7 Subsequently many studies have reported the cure rate from 8.5% to 99.7% with various concentration and number of injection.7, 8

The success rate of 78.6% (22/28) in group A patients is marginally less than the earlier reports. In a prospective study by Pavicic Astalos et al. 13 37 patients with primary and secondary chalazion received 1 or 2 injection of 0.1-0.2 ml of TMA 40mg/ml and 94.6 %(35/37) had complete resolution of chalazion by 2 weeks . In their study only after 2 injection success rate was 94.6% here we have considered only one injection and the difference is not significant (P=0.06). In an another retrospective study by Wong et al. 23 48 cases of primary chalazion were treated with medical treatment for a month and later 2- 6 mg of TMA 40mg/ml was intra lesionally injected and 83% (40/48) had resolution by 6 weeks. In this study also more than one injection was given and the difference not significant (P=0.76). In the above two studies, 22, 23 higher rate of success was possible after second injection. In our study same success rate was observed with single injection and we suggest single dose TMA may be sufficient.

The success rate of 65.6% (21/32) in group B patients is comparable to earlier reports.6, 8 In an randomized control study by Chung et al.6on comparing the outcome on conservative management with extra lesional TMA injection 16 chalazions of 28 chalazions received 0.3 ml of TMA 10mg/ml and 93.8% (15/16) had resolution and the difference is significant (P=0.04). The higher success rate in Chung et al study6 was possible after receiving more than one injection. Goawalla et al.8 in their prospective comparative study on 136 cases of chalazion, 56 cases received 0.2 ml of TMA 10mg/ml only 83.9% (47/56) had resolution at 3 week with one or two injection . Even thou the difference appears larger but statistically comparable (P=0.06). This confirms that lower concentration of TMA 10mg/ml is also effective in treatment of Chalazion.

The success rate of 78.6(22/28) in group A is higher than group B 65.6%(21/32) and the difference is statically significant (P=0.05). In most of the studies when the success rate was high, available TMA was 6-8 mg with more than 1 injection and low success rate when available TMA was 2- 4mg.6, 8, 13, 14 In our study group A cases received 8mg TMA and group B 2mg TMA hence there is statistically significant difference (P=0.05). This support the assumption of higher concentration of TMA has better results compare to lower concentration TMA.

The complication of yellow white deposit in the lid skin is 7%(2/28) and 6%(2/32) in group A and group B respectively and statistically not significant.(P= 1). Prolonged availability of stronger, crystalline and insoluble corticosteroid under the eye lid skin, Very thinnest lid skin and skin complexion of our population may be reason for visibility of yellowish white deposit of TMA. This complication is reported by earlier studies with use of TMA 40mg/ml,23 TMA 10mg/ml7 and TMA 5mg/ml injection.9 This side effect can be observed following conjuctival or transcutaneous route of injection. It is an important cosmetic blemish in young female patients. Four young female patients two each from group A and group B. All 4 patients under went surgical removal of yellow white deposit and subjectively not satisfied with the procedure. In these type of patients few sittings of counseling or incision and curette may be the better option.

Corticosteroid is known to induce raised intra ocular pressure when used either in topical, subconjunctival, para enteral, oral or inhaled form. In general population 4-5% are strong responders to steroid by showing elevation of IOP > 15 mm of Hg from the base line.This is more so in patients with POAG and their relatives, diabetes and myopics.27 In group A in 7% (2/28) cases had raised IOP of > 15 mm of Hg. One patient returned to normal IOP and other converted to steroid induced glaucoma. A comprehensive glaucoma eye examination to be done in high risk patients for glaucoma before taking for steroid injection.

The assumption of single injection of higher concentration TMA (40mg/ml) has more positive outcome compare to low concentration TMA (10mg/ml) appears to be proved in our study. Injection of TMA again confirms, it is a simple, economical and cost effective procedure. Very useful in children and patients not willing for surgery. Complications like raised IOP and cosmetic blemish by yellow white deposit in lid skin specially in young female patients are the concern. Pre procedural comprehensive glaucoma examination and good counseling in aesthetically concerned patients is equally important. Our study had following lacunae. It is randomized study, it had only primary chalazion and cannot say the efficacy on recurrent chalazion.

Single dose of higher strength of TMA is a effective, easy and economical procedure in treatment of chalazion.Complications like steroid induced glaucoma and cosmetic blemish are the concern.