A 25 year old male, chronic smoker presented with sudden diminution of vision and pain on ocular movement in both eyes. Fundus examination revealed both eyes optic disc swelling. Patient responded well to pulse dose intravenous Methylprednisolone (IVMP). MRI showed both eyes mild optic nerve sheath enhancement. Three month later, he came with blurring of vision in both eyes with right eye lateral rectus palsy. Atypical panel revealed Anti-MOG positive in serum. He was given IVMP and is started on oral Fingolimod, and is stable at present. We report a case of recurrent bilateral optic perineuritis with sero-positive MOG autoantibody and abducens nerve palsy.

Optic perineuritis (OPN) is an infrequent condition involving optic nerve sheath tissue and perineural fat. It is a part of orbital inflammatory disease and might present as orbital apex syndrome with optic neuropathy, proptosis, and ophthalmoplegia. Usually it is unilateral and idiopathic though occasional infectious, autoimmune etiologies have been reported. Clinically it presents as demyelinating optic neuritis with characterized by vision loss and pain on ocular movement, optic disc edema with peripheral vision loss sparing central vision. It’s crucial to differentiate it from demyelinating optic neuritis for its therapeutic and prognostic values.1, 2 Seldom cases have been described regarding simultaneous occurrence of OPN with MOG antibody positivity till date.2 We herein describe a rare case as follows.

A 25 year old male, chronic smoker presented with sudden diminution of vision and painful ocular movements in both eyes since 3 days. The best corrected visual acuity of right eye was perception of light and left eye was 1/60 and the intraocular pressures were 12 and 14mmhg respectively. On fundus examination both eyes showed significant disc edema (right eye more than left eye)(Figure 1). On basis of these findings, he was suspected to have bilateral optic neuritis and was treated with pulse dose Methylprednisolone followed by oral steroids. He responded well to therapy and improved to 6/12 and 6/9 in right and left eyes respectively with resolution of disc edema. (Figure 2) An MRI was advised which was reported to have mild perineural enhancement, unfortunately the patient was lost to follow up after that.

Three months after the first episode, patient reported again when he developed both eyes mild blurring of vision with drop in vision to 6/60 along with right eye lateral rectus palsy. The patient was advised an atypical optic neuritis panel of investigation, where he turned out to be MOG antibody positive. On redoing the MRI, the radiologist suspected the subtle perineural enhancement (Figure 3) secondary to be optic perineuritis and hence was referred to a neurologist. The neurologist diagnosed him as a case of MOG positive bilateral optic perineuritis and advised pulse dose Methylprednisolone therapy followed by oral steroid and Tablet Fingolimod. Two months after the therapy, patient’s vision improved to 6/9 in both eyes with resolving disc edema and lateral rectus function. Chances of recurrence were clearly explained to the patient. 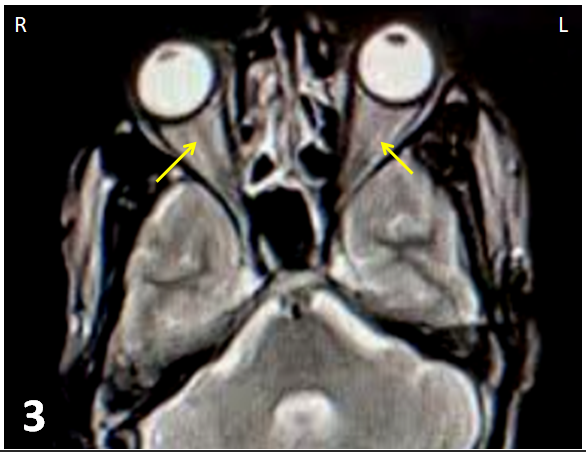 OPN is defined as a form of idiopathic orbital inflammatory disease, which target specific tissue in the optic nerve sheath.1 Its presentation mimics optic neuritis. It may have idiopathic or an underlying systemic inflammatory causes.1 Purvin et al reported 2 patients with abduction deficits out of 14 diagnosed OPN cases; similar case were reported by Joo young et al.1, 3

MOG is autoantibody acting against myelin oligodendrocyte glycoprotein and is well grooved biomarker of autoimmune inflammatory optic nerve pathologies.4 Oligodendrocyte cells of meninges express MOG. Though optic nerve sheath is equivalent to meninges, it does not express MOG. So role of MOG antibody in OPN is controversial. It has been proposed that MOG causes inflammation of optic nerve and this extend to nerve sheath also which show as optic nerve sheath enhancement in MRI.5 Ramanathan et al. recently reported a male patient with anti-MOG antibody positive OPN, who had peripheral visual impairment.6 In our case we also propose MOG antibody as possible causative factor in OPN.

MRI is preferred diagnostic modality for OPN showing perineural enhancement called “tram-track” sign on axial view and “doughnut” sign on coronal view. In recent MRI technique of fat suppression in with Gadolinium-DTPA contrast enhancement provide the best images of the optic nerve sheath, as well as the optic nerve.7

Steroid pulse systemic therapy followed by oral steroid is the mainstay in OPN, though recurrence is common. Recently, immunomodulator therapy like IV immunoglobulin, IFN β1 has come up with better outcome in chronic and recurrent cases. Fingolimod (sphingosine-1-phosphate receptor modulator) is an immunomodular drug, mostly used to reduce rate of relapses in multiple sclerosis (MS).8 The most common side effects of fingolimod are headache, diarrhea, nausea, abdominal pain and fatigue.8 Now a days fingolimod is considered as another option in treating patients of optic neuritis and OPN.

In patients having optic disc edema with pallor, MRI is mandatory investigation to go for. It rules out any demyelinating lesion or any intracranial pathology. MRI finding of perineural enhancement around optic nerve is the confirmatory sign of optic perineuritis. Treatment with steroid pulse therapy helps in quick visual recovery, but recurrences are common. Hence newer immunomodulator drug like fingolimod gives promising results in such cases. Thorough counseling of patient regarding smoking cessation, early treatment, visual outcome, adverse effects of medication and chances of recurrence should be done.

We would like to thank and appreciate the team of radiologists and neurologists who helped us in managing this case.

The patient has viewed the content and images of this case report and has consented to the submission of the case report for publication.

Recognition of the ocular damage and treating them appropriately is crucial in the management of keratitis caused by the plant juice.