Purpose: Retinoblastoma is the most common intraocular tumor of children. Globe salvaging conservative management is gaining popularity with advances in early diagnosis and advent of focal and systemic therapies.

Materials and Methods: This study is retrospective noncomparative interventional study at oculoplasty and ocular oncology department of Tilganga Institute of ophthalmology, Nepal in 2017-18.

Results: Thirty-five retinoblastoma patients with forty-five affected eyes were treated during the study period. Twelve eyes were salvaged and twenty-six lives were saved though more than sixty five percent of eyes were in group D or E. We could avoid exenteration and minimize enucleation in the study.

Retinoblastoma is the most common intraocular tumor of children with prevalence of 1:20000 live births in the western world.1 But they contribute only a few percent to global burden due to tumors in the world; hence seeking less attention and budgeting.2 Developing countries lack both manpower and resources to handle the few but fatal tumors of the eye. Conservative management with focal and systemic therapy is popular in saving lives and eyes of retinoblastoma patients but costs are a big limiting factor for developing countries. Many centers still opt for surgical management; skills, cost and availability of focal and systemic therapy still being a limiting factor. The objective of our study was to describe the demography of the disease in Nepal and to evaluate the outcome of globe salvaging conservative management. We present a retrospective study of our retinoblastoma patients with globe salvaging conservative management wherever possible and their outcome.

It is a retrospective, non-comparative interventional study done at oculoplasty and ocular oncology department of Tilganga Institute of Ophthalmology (TIO), Kathmandu Nepal. All consecutive new retinoblastoma case records who presented in the year 2017-2018 were evaluated and treated by a single ocular oncologist (PRS) were included in the study. Patient's data were retrieved from our electronic medical record system and fundus photographs taken during serial examination under anesthesia (EUAs). The study has been approved by the institutional review board of TIO.

The suspected cases of Retinoblastoma were diagnosed clinically with examination under Anesthesia and fundus photography done wherever possible. Demographic data collected included age at presentation, sex, presenting symptoms, family history, geographic distribution and laterality. B scan and computed Tomography/MRI brain and orbit were done to rule out extra ocular, optic nerve and extra orbital extension. Patients were categorized into intraocular and orbital retinoblastoma. Intraocular tumors were grouped according to Intraocular Classification of Retinoblastoma (ICRB) grading (Shields) into group A to E.

Orbital retinoblastoma and those with optic nerve invasion (seen in MRI/CT scan) were given high dose neoadjuvant chemotherapy with vincristine, etoposide, and carboplatin (VEC) 12 cycles. It was followed by enucleation with an implant and then external beam radiotherapy (EBRT) to orbit. ICRB Group B to E cases was treated with standard dose chemotherapy VEC 6 cycle. Focal therapies like Trans pupillary thermotherapy (TTT), periocular chemotherapy (POC) and Cryotherapy (cryo) were done during EUA before each chemo cycle. However, group E patients without clinical high-risk factors were also given a choice of primary enucleation. After completion of treatment, all the patients were followed up three months for 1 year and six monthly for two years and then yearly. Any recurrence was documented and treatment started again. All the enucleated patients received custom made prosthesis free of cost for social rehabilitation.

The clinical data were analyzed with regard to the outcome of the above treatment modalities- number of lives saved, eye salvaged, visual rehabilitation and social rehabilitation with prosthetic eye.

In the study period thirty-five new retinoblastoma cases visited the oculoplasty and ocular oncology department at Tilganga Institute of Ophthalmology. Male children were more than female children (male 24(68.5%)). Of the 35 patients, 10 patients (28.5%) had bilateral disease. Mean age at presentation was 31.8 months (median 24 months; range 1-84 months). Table 1. All the patients were of Asian race with 4 patients who came from foreign country. Rests were from various districts of Nepal.

Among 35 patients, 31 patients received medical management with systemic chemotherapy with three drugs (Vincristine, Etoposide and Carboplatin) for a mean of 6.86 cycles (range 2 to 12 cycles). 12 cycles of High dose chemotherapy were given to 9 patients (29%), among them 6 patients had presented with orbital disease and 3 patients had high risk positive after enucleation. One patient who received 2 cycles as neoadjuvant chemotherapy was lost follow-up and came back after 5 months with phthisis bulbi and underwent enucleation surgery. Rest of the patients received 6 cycles of standard dose chemotherapy as shown in Table 2. Of the 10 patients who underwent Chemo reduction, 12 eyes also received focal therapies every month before next chemo cycle in the form of Trans pupillary thermotherapy (TTT in 8 eyes), periocular Topotecan injections in 4 and periocular Carboplatin in one patient.

Globe salvaging conservative management of Retinoblastoma: Management (After excluding Lost to follow up)

Twenty-three eyes underwent surgical management with enucleation with implant. Among them only four had primary enucleation while the rest of them underwent secondary enucleation after neoadjuvant chemotherapy. Enucleated patients were rehabilitated with custom made prosthesis. At the end of the study period, we could salvage 12 eyes (26.66%). Life salvage was confirmed in 26 patients while 7 patients were lost to follow up after near completion of treatment as shown in Table 3. 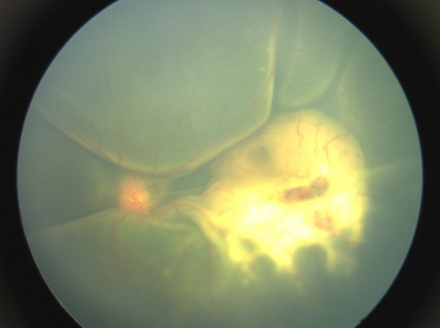 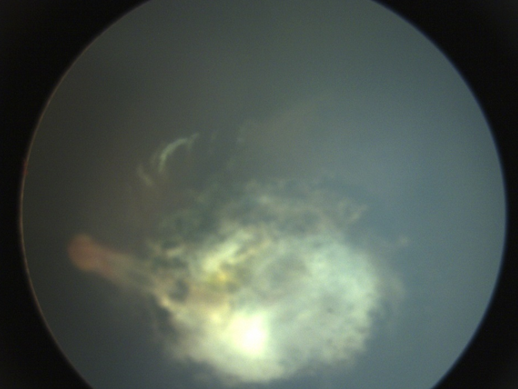 Recent studies have shown trends for earlier presentation of retinoblastoma patients, hence earlier detection of tumor and opportunity for conservative globe preserving treatments. Retinoblastoma diagnosis and treatment is an example of advances made in medicine where a near lethal pediatric cancer with around 5% survival rate in 19th century has turned to a curable disease with highest survival rate among pediatric cancers.

Retinoblastoma is the most common primary cancer of the eye in children. It attracts less attention in global policy making because it represents only approximately 4% of childhood cancer and less than 1% of all human cancers.3 Developed countries have achieved near zero mortality while developing countries like Nepal still sees high mortality (19%) and morbidity in retinoblastoma patients.4

In our study male patients were double the number of female patients similar to Congo.5 Though most studies show male preponderance of disease, studies in Singapore, Iran and New South Wales show female preponderance.6, 7, 8 The mean age of presentation in our study (31.8 months) was consistent with most studies in Asian and African countries but was higher than USA and New South Wales.8 Different studies in Nepal show gradual increase in number of cases per year with earlier presentations. In our study, we saw 35 cases during one year of our study period which is the highest number of patients per year among all studies done in Nepal. This probably reflects increased public awareness, easy access to health care services and inclusion of ocular oncologist clinics in our center. More than 71% of our patients had unilateral disease and are consistent with different studies with 57 to 85% unilateral cases.4, 5, 6, 8, 9, 10, 11, 12, 13, 14, 15, 16, 17 Leukocoria is the earliest presentation and was most common symptom and sign in our patient like different studies in brazil, Egypt ,Singapore, Congo, Iran, New York, Mongolia, China, New South Wales and Foreign country, while proptosis was the most commonest in Indonesia, Nigeria, Africa and a study in eastern Nepal.7, 13, 18, 19 The earlier research on retinoblastoma in Nepal shows leukocoria as the commonest mode of presentation10, 17 while one study shows proptosis as the most common presentation.19 Surgery was the most favored mode of management and enucleation (90%; 78.38%; 55.81%) was the most common mode of treatment followed by exenteration (6.7%; 5.40%; 41.86%).10, 17, 19 All enucleated patients were rehabilitated with custom made prosthesis (CMP). CMP is better than stock prosthesis and gives better cosmetic rehabilitation.20, 21 Ben et al in their study reported retinoblastoma as the most common cause of exenteration.22 None of our Rb patients underwent exenteration in a given study period. We could save 26 patients (92.86%) during our study period; it is encouraging though not in par with the developed countries like Singapore with 91%, Europe with 95% and USA with 96% survival rate.6 Our figure may be biased since we did not take the 7 lost to follow patients into account. Presuming the lost to follow up patient died, our survival rate will be 74.3%. Republic of Congo study show over 75% lost to follow up with presumed mortality of 92.5%.5 We salvaged 34.29% of eyes most of them were group B, C and D; It is less in comparison to Singapore with 100% glove preservation in Group A, B, C and 23.1%in group D and South Korea they salvaged 66.7% in group c and 26.7% in group D. This may be due to more advanced cases (57.78%) of our patients were in group E. 6 Neoadjuvant chemotherapy was able to prevent orbital Exenteration, in a prospective study by Radhakrishnan et al. 23 In our study 15 cases (48.39%) were given neoadjuvant chemo, chemo reduction was done in 10 cases (32.26%) and adjuvant chemo was given in 6 cases (19.35%). Four patients received periocular topotecan and one patient received periocular carboplatin, Periocular topotecan has been known to be effective against focal vitreous seeds along with intravenous chemotherapy.24

In a large scale retrospective study in Foreign country, patients were treated with systemic chemotherapy (60%) followed by enucleation (35%) and they stated a survival rate of 89% in 10 years with 8% death in 44 month follow up.16 Shah et al found a mortality rate of 19% in their study with patients undergoing chemotherapy though the cause of death was not analyzed. They presented a 10 year survival rate of 23.8% among their 42 cases.4 Badu et al study showed 44.19% mortality among their patients.19 In our study chemotherapy and EBRT were done in different centers with respective subspecialty facilities. Hence the cause of death couldn’t be classified to disease progression or adverse effect of treatment. Two patients (7.14%) died during chemotherapy; 26 patients (92.86%) survived the 1-year study period. Interestingly 12(34.29%) eyes were salvaged in our study. Till date we do not have molecular testing for Rb in Nepal and effective genetic counseling is difficult to deliver for informed family planning decisions though Ram Prasad, V.L. et al has aptly described its importance in familial Rb.25 Retinoblastoma programs like in Central America may decrease defaulters and increase survival rates in Nepal.26

In most previous studies, conservative management including focal therapy was not popular. Exenteration is rarely done but enucleation is still practiced widely due to relatively ease, cost friendly and one-time procedure for advanced cases. In our study increased awareness (via patients, social media and newspaper) has increased the patient flow and decreased median age of presentation. Addition of Trans pupillary thermotherapy, portable fundus camera, examination under anesthesia (EUA), separate ocular oncology clinics has facilitated intraocular and periocular chemotherapy and hence promoted safe conservative management of retinoblastoma. Conservative management of retinoblastoma is facilitated by patient awareness, early presentation and availability of equipment and trained human resources. Dedicated oncology department, increase in trained manpower, public awareness and availability of multimodality treatment has decreased mortality due to retinoblastoma but early diagnosis, compliance with treatment and follow up is still an issue to be concerned.

GA Miranda GWS Simanjuntak Clinical Findings and Demography of Retinoblastoma in a Tertiary Hospital in a Remote Area in a Developing CountryAsian Pacific J Cancer Care20183210.31557/APJCC.2018.3.2.37