Agarwal, Pal, Sharma, Jain, and Mishra: Fungal infections of the orbit: The present scenario in a developing country

Fungal infections of the orbit: The present scenario in a developing country

Introduction: Fungal infections of the orbit have been recognized as one of the most critical infective lesions in the field of ophthalmology due to its morbidity, its association with blindness and even mortality. Delayed presentation and nonspecific symptoms present peculiar challenges in diagnosis and management to the ophthalmologist. This descriptive retrospective study was done to characterize fungal infections of orbit in terms of demographic variables and associated risk factors as well as to describe the clinical spectrum and outcomes of the disease.

Results: 20 cases of fungal infections of orbit due to microbiologically confirmed mucormycosis or aspergillosis were identified during this period. Continuous data was presented in median (interquartile range) and categorical data was represented in frequency (%). Mann Whitney u test was used for continuous data and Fischer exact test was used to compare proportions. Patients with mucor mycosis had higher mortality (53.3%) than aspergillosis (25%). Extension to brain, haematological malignancy and AIDS are negative prognostic factors.

Fungal infections of orbit are rare and a lethal type of orbital lesions. These usually spread to the orbit secondarily following inhalation and infection of sinuses (angio-invasive). Presentation may be delayed and often mimic mass lesions, misdiagnosis may result in treatment with corticosteroids with dangerous results. The prevalence of fungal infections in orbit, most common of which are mucormycosis and aspergillosis have been on a rise.1 India has especially shown a huge increase in disease burden largely due to changing population demographics. Increasing prevalence of lifestyle diseases like diabetes, increased diagnosis and treatment for malignancies, immunosuppression for organ transplant are all predisposing risk factors.2, 3

Mucormycosis is caused by fungus in the order Mucorales, of which Rhizopus species is the most common. Aspergillosis is caused by fungus in the order Eurotiales and genus aspergillus.4 Clinical presentation is widely variable ranging from non-specific fever, nasal discharge, periorbital or lid pain, proptosis, nasal eschar, epistaxis to sudden acute loss of vision.5, 6, 7, 8 Although both invasive aspergillosis and mucormycosis infections are often grouped together under the umbrella of invasive fungal infections, studies have found very different clinical outcomes between these two fungal infections, with mucormycosis having higher orbital predilection and worse outcomes.9 Orbital involvement in invasive fungal infections is itself associated with worse prognosis.

A high index of suspicion in a predisposed patient facilitates rapid tissue diagnosis and early initiation of management. The treatment options for infected orbital tissue along with generalized consensus on treatment with systemic antifungals are: exenteration, conservative debridement and transcutaneous retrobulbar injection of amphotericin B. Though exenteration is the most frequently reported intervention but has not been proven to enhance survival. Given the rarity of fungal infections of orbit there is no established guideline for management. Thus, conservative debridement and transcutaneous retrobulbar injection of amphotericin B are being increasingly considered reasonable first-line options.10 Even with rapid diagnosis and initiation of treatment, prognosis is poor with mortality ranging from 21% to 80%.11, 12, 13, 14, 15, 16

Thus, this descriptive retrospective study was done to characterize fungal infections of orbit in terms of demographic variables and associated risk factors as well as to describe the clinical spectrum and outcomes of the disease.

The study is a retrospective, clinicopathological analysis of invasive fungal orbital disease presenting at a tertiary care multi-speciality centre over a period of 6 months from 1st January 2019 to 30th June 2019. This study was conducted in accordance with the Declaration of Helsinki and informed written consent was obtained from all patients prior to enrollment in this study.

Medical records of all microbiologically proven cases of orbital mucormycosis and aspergillosis who either came directly to the ophthalmology outpatient or were referred for ophthalmological opinion from other departments were reviewed. Data collected included demographic details as well as any medical or surgical morbidities, ongoing treatment, clinical examination findings which included detailed ophthalmologic examination (visual acuity on Snellens chart, colour vision by Ishihara chart, contrast sensitivity by PelliRobson chart, pupillary reaction, slit lamp examination, fundus examination, exophthalmometry and intraocular pressure measurement), findings of routine investigations as well as HIV serology, orbital and neuro imaging reports. Treatment outcome details were also recorded from medical follow up records. MRI with and without contrast or CT Scan of orbit and brain/head was performed in all patients and repeated after 3 months.

For mucormycosis, medical treatment included liposomal amphotericin B at a dose of 2 – 10 mg/kg/d for a period of 4 to 6 weeks. Early wide debridement of devitalized tissue with adjunctive antifungal therapy was done for cases with extensive tissue involvement. Biopsy proven aspergillosis cases were treated with oral voriconazole at a dose of 200mg bd along with liposomal amphotericin B. Oral itraconazole was given for residual disease at a dose of 400mg/day for 10 -12 months. Repeated tissue debridement with endoscopic evaluation was done every week if required. For extensive orbital involvement exenteration was done.

20 cases of fungal infections of orbit due to microbiologically confirmed mucormycosis or aspergillosis were identified during this period. 75% (n=15) cases were referred to Ophthalmology from other departments while 25% (n=5) cases came directly to Ophthalmology outpatient. Median age at presentation was 47.5 years (range 11 years to 70 years). No sex predilection was seen.

Out of all the cases of orbital involvement 6 had undergone renal transplant, 11 had uncontrolled diabetes as the only predisposing factor, 1 patient had AIDS, 1 patient was on chemotherapy for breast carcinoma and 1 had haematological malignancy.

Paranasal sinuses were involved in 19 cases while one case had only cutaneous and orbital involvement. Ethmoid sinus was most commonly involved. Intracranial extension was observed in 9 cases.

Out of the 15 mucormycosis cases, 7 cases improved while 8 cases had poor outcome. 4 out of 5 cases of aspergillus infections improved.

Patients with mucor mycosis had higher mortality (53.3%) than aspergillosis (25%). With advent of liposomal amphotericin B overall survival rates have risen. Extension to brain, haematological malignancy and AIDS are negative prognostic factors. 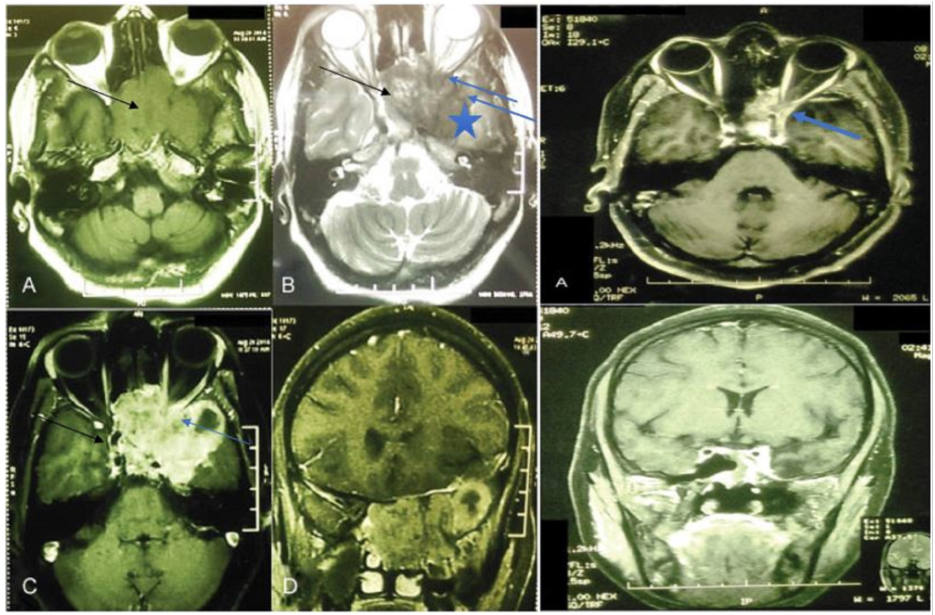 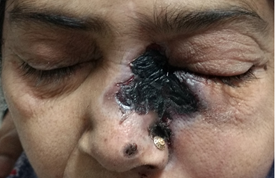 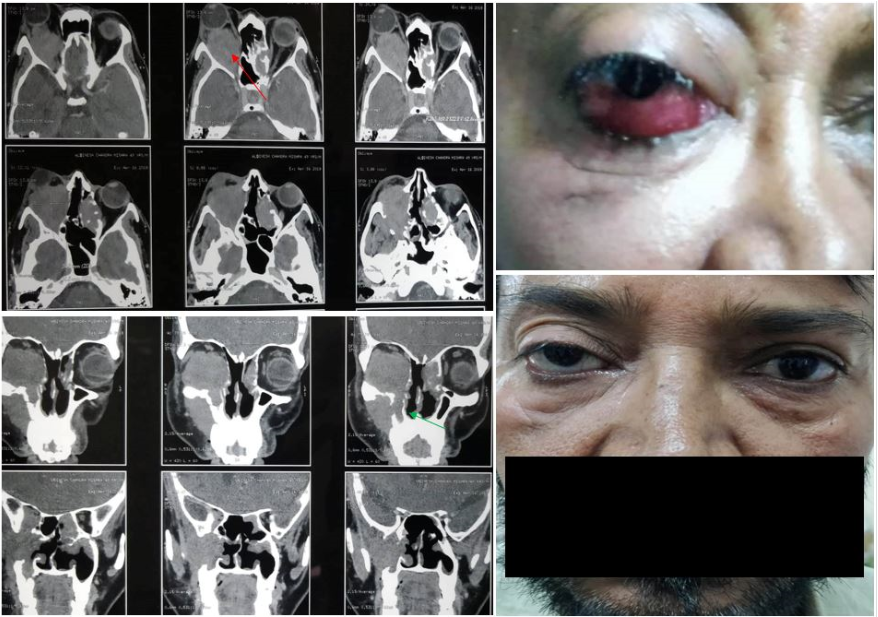 A case of aspergillosis presenting with vision loss (PL+) and lateral rectus palsy which improved clinically after voriconazole therapy.

Most common orbital fungal infections are mucormycosis and aspergillosis.17 In our retrospective observational study we enrolled 20 cases of microbiologically confirmed fungal orbital infections over a period of 6 months of which 15 were caused by mucor and 5 were associated with aspergillus.

Malignancy is the most common predisposing condition to fungal infection of the orbit in developed countries unlike developing countries like India where increased prevalence of uncontrolled diabetes mellitus is the major contributing factor.2, 3, 4 Chakrabarti et al. reported from a study conducted in a tertiary care centre in northern India that 74% of patients with mucormycosis had uncontrolled DM and in 43% of the patients, mucormycosis worked as diabetes-defining illness.18 In our study, 55% of the patients were found to have diabetes mellitus as the predisposing factor. A deviation from the usual causes reported in literature in developing countries, 6 out of the 20 patients (30%) were post renal transplant patients on immunosuppressive agents.

Uncontrolled diabetes is known to adversely affect the humoral immunity along with the neutrophilic function and known to have poor iron metabolism.19, 20 Iron overload is also a risk factor for fungal infection and patients with iron overload (haemochromatosis) or who are treated with iron chelating agents are at risk of developing fungal infections of the orbit.21 Danielle Trief et al. concluded from there retrospective review that patients with diabetes as the predisposing condition had better prognosis (mortality rate 40%), whereas the patients with immunosuppression post-transplant had the worst prognosis with mortality rates of 75%.12 In our dataset 5 of the 6 post renal transplant patients had unfavourable outcomes in terms of mortality (mortality rate of 83.3%) out of which 4 patients were diagnosed to have mucor and one patient was found to have invasive aspergillosis.

11 patients had favourable outcomes in terms of survival thus showing a survival rate of 55%. Aspergillosis was associated with better survival rates (80%) than mucormycosis (46.6%) which can be explained by the more aggressive natural course of mucormycosis.11 Fungal infections of the orbit was associated with blindness in 75% of our patients. The contribution of mucormycosis as a cause of blindness was significantly higher than aspergillosis. (86.6% vs 40% with p value<0.05).

The treatment regimen has remained similar, that is, debridement (endoscopic and/or open) with antifungal medication, although pharmacological developments have been made. Early diagnosis of fungal infections of the orbit has been the cornerstone for favourable outcomes and decreased mortality. Albeit,diagnosis is often challenging as patients may present with symptoms and signs masquerading as a mass lesion. The advent of liposomal amphotericin B has made a huge impact on the survival rates associated with fungal infections of the orbit, the only drawback being its high cost and inability to afford in developing nations. However, as demonstrated by our study, careful consideration of fungal infection should be given to any immunosuppressed patient presenting with proptosis along with new ophthalmoplegic symptoms and steroid treatment should be avoided until fungal infections of the orbit are ruled out.

Invasive fungal disease of head and neck are rare life-threatening infections. A meticulous examination, early diagnosis and prompt treatment is required to improve the outcome of disease. Orbit involving mucormycosis infection is more common and has higher mortality than aspergillus infection. Late presentation is more common in developing countries. With the advent of better medication for treatment the overall mortality rate has decreased.

The authors declare that there is no conflict of interest.