Aim: To study the abuse of topical steroids in vernal keratoconjunctivitis resulting in steroid induced glaucoma in paediatric age group in rural population of Bangalore

Materials and Methods: A retrospective study of patients who were using topical steroids in VKC from July 2018 to august 2019. A total of 600 patients which were on treatment for nearly 2yrs were reviewed. Age ranged from 8 to 16 years.

Conclusion: abuse of steroids leads to vision threatening complications like glaucoma in children VKC, hence the vision and IOP monitoring every 15 days and using of weak steroids can be helpful for the prevention of the disease at the earliest

Vernal keratoconjunctivitis (VKC) is bilateral, interstitial, self-limiting allergic inflammation of the conjunctiva having periodic seasonal incidence usually seen in children around 4 to 20 years.1

It is mainly type 1 mediated hypersensitivity reaction to pollen allergens usually seen in subjects with a atopic background such as asthma, eczema.2 More commonly seen in summer hence known as warm weather conjunctivitis presents with a marked burning and itching sensation. Signs can be described in 3 forms palpebral, bulbar and mixed forms.3

The treatment of the VKC includes avoiding the causative agents, cold fomentation, mast cell stabilizers, antihistamines, NSAIDS, lubricants. Up to 90% of the subjects require corticosteroids during the course of the disease.4

Current therapy of ocular allergy involves elimination of the offending allergen, modulation of the immune system, and pharmacologic inhibition of the chemical mediators and rebamipide can be effective in VKC with giant papillae not responding to topical steroid.7, 8

This is a retrospective study conducted from July 2018 to August 2019. 600 children diagnosed with VKC between the age group of 8 to 16 years on treatment for nearly 2 years were included.

The patients who met the 2 out of the 3 following criteria were included in the study: IOP > 21mmHg on more than 2 occasions, Optic nerve head changes due to glaucoma, Visual field defects analyzed by Humphrey automated perimeter. The patients having angle anomaly, history of congenital or developmental glaucoma, Trauma and Uveitis were not taken for the study.

Detailed demographic data about symptoms of marked burning and itching sensation, mild photophobia, lacrimation, stringy discharge and heaviness of lids and History of steroid use including drug name, duration, and frequency and the clinical details were noted down and entered into a standard clinical proforma. Uncooperative patients were excluded from the study.

Mean, median, standard deviation, ranges were evaluated for continuous variables and for categorical variables, frequency and percentages were recorded. Chi-square test and ANOVA test were also used whenever necessary Independent t test was used to compare mean between the two group. P value of less than 0.05 within 95% CI was considered statistically significant 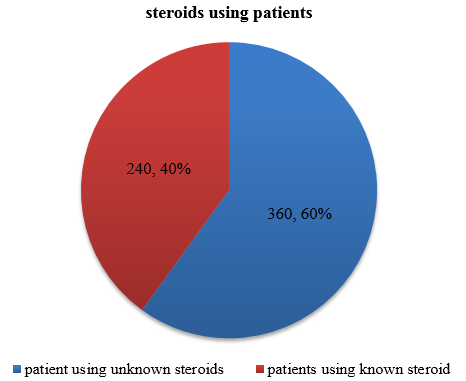 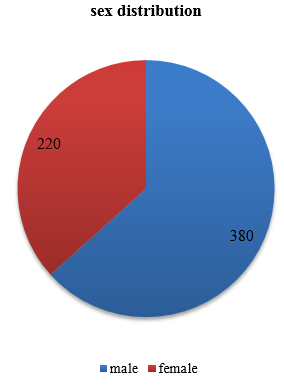 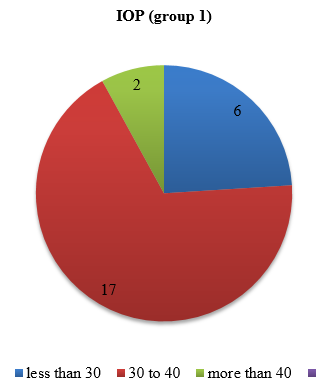 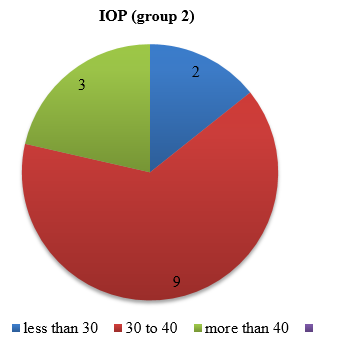 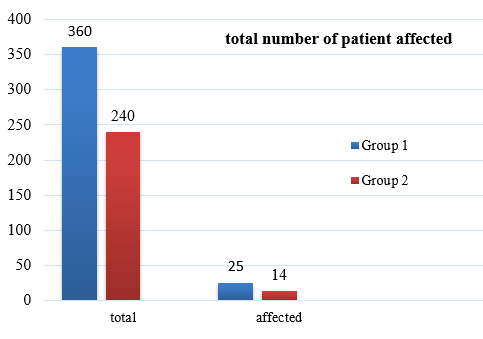 The patients continued to use the steroids, because of the quick relief   in symptoms of VKC. Injudicious use of steroids and inadequate monitoring led to steroid induced complications like ocular hypertension, glaucoma and cataract affecting vision markedly

Vision loss resulting from cataract is reversible and relatively easy to manage but glaucoma is often recognized late leaving patients with permanent visual impairment Pradhnya Sen et al, showed that out of 1423 patients, prevalence of steroid induced glaucoma was 3.3% and they concluded that in patients using high potent steroids like dexamethasone and betamethasone have high risk whereas the use of low potency steroid have low risk of steroid induced glaucoma. In our study the prevalence is around 4.16%.5

Marcuss ang et al, in their study showed 41(28.3%) out of 145 patients developed ocular hypertension in which 8(5.5%) patients progressed to glaucoma.5

Vision loss resulting from the cataract is reversible and relatively easy to manage but glaucoma is often recognised late leaving patients with permanent visual impairment.5

Steroid induced glaucoma is an important complication seen in patients with VKC due to prolonged use of topical steroids. These children will have long term visual impairment and there will be financial burden to treat complications.5 Therefore, measures need to be taken collectively by patients, ophthalmologists and the government to prevent steroid misuse. It can be prevented by proper counseling, regular follow up and monitoring the IOP along with visual field testing.

Topical corticosteroids are often used during flare-ups in combination with mast cell stabilizers as maintenance treatment for VKC.9

The pathogenesis of VKC is complex and involves environmental, endocrine, racial, and genetic factors.10 Use of the weak steroids can be helpful for the prevention the disease at the earliest. Thus, the usage of topical steroids without proper consultation or the long term in judicial usage should be avoided. And if the patients are on the therapy regular IOP monitoring along with the monitoring of the above-mentioned parameters should be done so that timely measures can be taken to prevent permanent visual loss