Aim: Road traffic accidents (RTAs) are the most common cause of polytrauma. This study aims to evaluate the various ocular manifestations in cases of RTAs.

Materials and Methods: A retrospective review of patients who were treated for RTAs in a tertiary hospital in 6 months from December 2018 to May 2019. A total of 126 patients were reviewed. Age ranged from 2 to 85 years. The mean age was 32 years.

Results: Ophthalmological examination was undertaken in all patients involved in RTA. Out of 126 patients, 112 were males and 14 were females. Young adult males (21-30 years) were most vulnerable to RTAs. Soft tissue injuries were the most common manifestations (57.93%) followed by neuro-ophthalmic manifestations (26.98%) and orbital fractures (15.07%). The presence of CT abnormalities especially intra cranial haemorrhage was associated with neuro-ophthalmic deficits.

Ocular trauma is the cause of blindness in more than half a million people worldwide and it is often the leading cause of unilateral loss of vision, particularly in developing countries.1 The role of ocular injuries due to head trauma in the causation of blindness and overall prognosis of patients has become a subject of immense importance with RTAs being the most common risk factor.2 Head injuries are frequently associated with ophthalmic manifestations and consequent visual morbidity.3 Ocular trauma can be easily prevented by use of various safety precautions. This study aims in providing information on the pattern & magnitude of ocular injuries following RTAs at Dr.B.R.Ambedkar Medical College and Hospital.

A retrospective chart review of patients who were involved in RTAs in Dr.B.R. Ambedkar Medical College in 6 months from December 2018 to May 2019. A total of 126 patients were reviewed.

Detailed history regarding the injury was taken and the clinical details were entered into a standard clinical proforma. Uncooperative patients were excluded from the study.

Evaluation in out patient department included assessment of visual acuity with pinhole using snellen’s chart, anterior segment evaluation was done with slit lamp. Posterior segment assessment was done on dilated eye by direct and indirect ophthalmoscopy. Intraocular pressure by Goldmann applanation tonometer was done when needed. Neurological visual field defects were assessed using HFA SITA on patients with pupillary involvement and suspected field defect on confrontation. Gonioscopy was done if necessary for the case studied. Computed tomography of brain, skull and spine, MRI and B-Scan was taken whenever appropriate

Microsoft excel sheet was used to tabulate the data. Mean, ratio and percentages of the variables were calculated. The results found were analyzed and significance by p values was calculated using chi square test.

Among the 29 cases of EOM restriction 15 cases had cranial nerve palsy. Most commonly involved was oculomotor nerve seen in 6 patients (4.76%), then abducens nerve in 4 patients (3.17%) followed by trochlear and trigeminal nerve involvement both having 2 cases each (1.58%) and facial nerve with 1 patient (0.79%).

Ratio of males to females 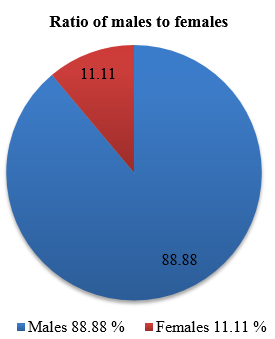 Age distribution of the patients 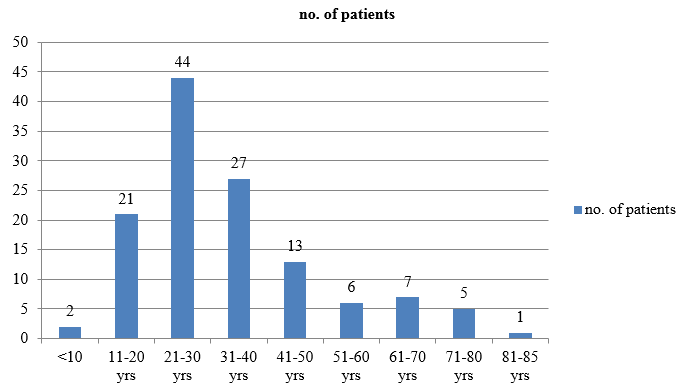 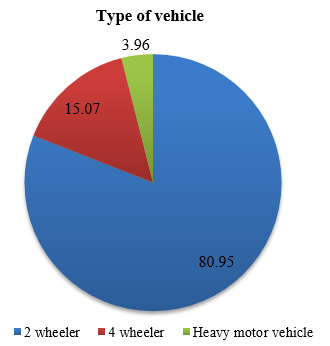 Distribution of ocular manifestations in RTAs

Visual outcome in the patients 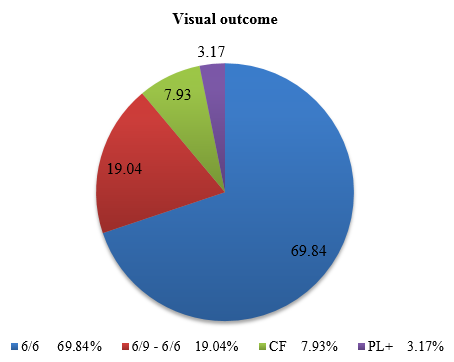 In India which is progressing towards more cosmopolitan standards, road traffic accidents play a major role in physical sufferings of young working generation. Head injury being one of the important cause and eyes being frequently involved in most of head injury patients, it has to be ensured that adequate ophthalmic assessment happens on time and treatment is to be delivered accordingly to prevent permanent visual deficit.4 India accounts for approximately 10% of RTA world wide. In many series worldwide, traffic accident constitutes the leading cause of head injury which is shown in study of Odebode et al,5 Kulkarni et al,6 Masila et al,7 Sabates et al.8

Shtewi M EL et al have done a two year study from an Eye hospital in Libya on road traffic accidents and ocular trauma.10 They reported that out of 248 patients included in their study, 186(75%) were male and 62(25%) were female. Similarly Johnston PB from Northern Ireland reported the incidence as 72.20% in males and 27.80% in females.11 Arora AS et al have done a similar study from India, Rajasthan and reported the M: F ratio to be 2.5:1.12

Right eye injury was more frequent (60%, 24 patients) than left eye (40%, 16 patients), in the study conducted by Parri Muralidhar et al.9 The visual acuity immediately after the trauma ranged between 6/6 to PL. Most of the patients had VA between 6/9 to 6/36, who had sustained ocular adnexal injury, periorbital fracture, subconjuctival hemorrhage, and echymosis. Drastic fall of VA to hand movements and perception of light had occurred in two patients who sustained dislocation of lens and posterior segment involvement mainly traumatic optic neuropathy. After treatment there is regain of VA to 6/9 in patients who sustained ocular adnexal injury and periorbital fracture. Most of the patients had sustained subconjuctival hemorrhages, ecchymoses and ocular adnaxal injuries rather than penetrating globe injuries involving posterior segment of the eye.

The most common ocular injury in a study conducted by Menon et al13 was periorbital oedema with ecchymosis (68.6%). These were also the commonest ocular injuries reported by Alam J et al 14 and Kumarasamy et al15 in their studies but the commonest ocular injury reported by Muralidhar et al9 was sub-conjunctival haemorrhage followed by echymosis. In present study eye brow laceration (63.9%) and lid laceration (48.2%) were next in the list (Table 2). In the same study by Kumarasamy et al, the author reported hyphaemia in 4.16% patients, however present study showed only 2.1% of hyphaema.15

Patients with neuro-ophthalmic deficit following head trauma can be a diagnostic and therapeutic challenge mostly due to the frequently vague nature of their visual complaints and their coexistent neurologic deficits. Pupil size and reaction to light is very important in the initial assessment of head injury cases. Apart from pupillary signs of uncal herniation and associated primary injuries to the globe, the ocular findings are of secondary importance during emergency management of the patient.6

Kowal’s17 study reported problems of poor accommodation with one or more cases, convergence insufficiency or acquired pseudomyopia in 36%, vitreoretinal disturbances in 5.6% and vitreous haemorrhages in 3.7% patients. There was one case each of a macular hole, retinal tear and retinal detachment and the one patient who developed bilateral idiopathic blepharospasm also had unexplained diplopia. Ptosis without any evidence of oculomotor nerve palsy or lid or orbital damage was present in 2.5% cases.

Commonly reported abnormalities by Moster et al16 were, traumatic optic neuropathy (18% as opposed to 2.38% in our study), homonymous hemianopia (15%) and Horner’s syndrome (7%) and multiple abnormalities (42%). Cortical blindness was reported in 0.4–0.6% by Banks et al.18

The mechanism of injury for optic neuropathy can be direct, indirect, or due to swelling of optic disc. Contusion injuries to the optic nerve are common after a head injury. An amaurotic pupil is objective proof of an afferent lesion in the pupillary reflex (or a conduction defect in the optic nerve), while at the same time the motor limb (of the third cranial nerve) is intact. It implies that a total and irrecoverable loss of vision has occurred in the affected eye although the optic nerve head may appear normal on first examination in the hospital. Countercoup contusion to the optic nerve has been reported to be transmitted through the temporal bone.19

Pupillary signs are of huge importance in indicating the site and severity of injury and in the prognosis of head injury. These help in localizing the site of supratentorial injuries, extradural and subdural haemorrhages, and pontine lesions and various other cranial abnormalities. Hutchison’s pupillary signs indicate progressive coning and the need for emergent life-saving intervention if and when required. Pupillary abnormalities, papilloedema, and lateral rectus palsies usually point towards a poorer outcome. Identifying these early would definitely reduce the incidence of consequent morbidity and mortality and can also help in saving a life.

Kulkarni et al6 came to the observation that pupillary abnormalities (6.5%), papilloedema (5.5%) and lateral rectus palsy pointed towards a poorer outcome. The presence of eye signs did not mean that a patient was more likely to have neurodeficit. Association between the ocular signs and the outcome was significant (P value = 0.003). All the patients that died had ocular involvement and 13% of patients with ocular signs died. In this study, patients with eye signs of neurological significance were more likely to have neurodeficit and to die than those with other eye signs or no eye signs. There is a significant association between neuro deficit and outcome. Neurodeficit was found in all the patients that died which was significant. The outcome is worse in patients with GCS 6–8 with ocular involvement and neurodeficit (P value = 0.001 - Fisher’s exact test), and those with GCS 11–12 and ocular signs (P value = 0.04). This showed that GCS contributed significantly to the outcome. Neurodefecit and other ocular signs also play a significant role in contributing to the visual outcome and overall outcome of the patient.

Sharma et al20 found that the most common age group involved was, 21–40-year-olds (67.40%). Out of 594 patients, ecchymosis was found in 51.85%, subconjunctival hemorrhage in 44.44%, lid edema in 41.48%, lacerated wound in 22.59%, pupillary involvement in 21.04%, ptosis in 6.73%, cranial nerve palsy in 11.62%, orbital fractures in 10.44%, optic nerve trauma in 4.04%, and exposure keratitis in 4.21%. Patients with bilaterally dilated or pinpoint fixed pupils had a 10 times higher risk of mortality than patients without pupillary involvement. Third nerve involvement was seen 2.85 times more frequently in frontal and parietal region injuries compared to other sites of injury. The involvement of the sixth nerve occurred 4.6 times more frequently in parietal region injuries compared to other sites of injury.

The incidence of abducens nerve palsy in Odebode et al5 study was reported to be 27% and Abbasi et al21 study was found to be 41%. But in our study oculomotor nerve was the most common involved with 4.76%. Retrobulbar neuritis was found in 6.5% of the patients in Abbasi et al study compared to 2.38% in our study. In Kumari et al22 study disc edema was found in 16.27% compared with 14.28% in our study. Similarly lateral wall orbital fractures were the most common orbital fractures in Kumari et al study with 5.81% compared with our study with 7.14%. In Rupani et al23 study. Maurya et al reported floor and roof of orbit as most commonly fractured orbital wall24 and Abbasi et al21 study frontal bone fracture was the most common. Maurya et al25 [25] observed cranio-orbital trauma in 19.23% cases and cranio-orbitofacial trauma in 25.0% RTA cases

Soft tissue injuries, orbital fractures and neuro – ophthalmic manifestations are the major ocular manifestations in RTAs. Almost all the ocular injuries in RTAs are associated with head injuries. So every patient with head injury should be examined for eye signs on both the first presentation and follow up visits. Visual prognosis will significantly be improved if there is prompt diagnosis and treatment of the patients. Proper examination of the patient is absolutely required with various imaging techniques.

Increasing public awareness of safety precautions is crucial to prevention of RTAs. Many RTAs can occur while driving under the influence of alcohol. Proper checks and awareness should be done to avoid drinking and driving. Proper safety rules should be followed by the public. Safety equipment like wearing helmets which is made mandatory should be followed. Meticulous observation of traffic rules is absolutely necessary. Maintaining the speed limits especially on the highways is very important.

Driving recklessly not only endangers the life of the person driving but also the passengers in the vehicle and also others outside the vehicle which may be other drivers or even pedestrians.