Introduction: The eye because of its location in the head and its proximity and neuronal connection with the brain, makes it more vulnerable in head injuries. An increase in the affordability and the attitude of younger generation has lead to the increased incidence of head injuries. Most of the times the ophthalmic manifestations are missed in early stages, where life saving assures the prime importance. This results in grave ocular complications when the patient survives.

Aim: Various patterns of ophthalmic manifestations following head injury are studied. The grave situations are explored and importance of safety measures may be emphasized.

Materials and Methods: All patients who sustained head injury with ophthalmic manifestations were enrolled in this study. They were subjected to thorough clinical evaluation, tests for visual acuity, color vision, examination with slit lamp, ophthalmoscope, ultrasound b scan, gonioscopy and various imaging techniques, other specialty opinion was also obtained whenever required.

Results: Distribution of cases according to the age, sex, mode of injury, laterality of the eyes was studied. Various ophthalmic presentations associated involvement of the orbital walls and cranial nerves were analyzed. Visual acuity at the time of presentation was correlated.

Conclusion: The common mode of head injury which had considerable morbidity was found to be Road traffic accident. Precautionary measures should be initiated that may decrease these kinds of morbidities. These patients should be properly evaluated, monitored and managed.

One of the major causes of disabilities in patients is head injury. The eye owing to its proximity to the head and its neuronal connections with the brain makes it more vulnerable with head injuries. Head injuries commonly involve the eye despite it being well protected by the bony orbit, eyelids, eyelashes and cushion of orbital pad of fat.

Even the non-penetrating head injuries may cause the shearing and stretching forces that may lead to brain damage, which may involve areas of vision.1 An increase in the affordable capacity and changes in the attitude of the younger generations have great influence on the behavioral pattern that have lead to increase in the incidence of head injuries.

Most of the times the ophthalmic manifestations are missed in the early stages and presented late to the ophthalmologists.2 This may result in late complications and visual disabilities to the patients.3 These can be prevented with early recognition, proper assessment and correct management protocols.4

To study the various patterns of ophthalmic manifestations following head injury. To formulate the important safety measures that will be beneficial to the patients.

All patients who had sustained head injury and having ophthalmic manifestations attending the emergency ward, ophthalmology and neurosurgery department in our institution for a period of one year were taken up for our study. This is a prospective and analytical study, One hundred and sixty four patients who sustained head injury presenting with ophthalmic manifestations were included. All patients or their attenders were subjected to detailed history elucidation like mode of injury, status at the time of collision, alcohol or any other drug abuse, loss of consciousness and presence or absence of safety measures.

All patients were subjected to following eye examinations.

Diffuse illumination with a good torch light was used for routine complete examination. Snellen chart was used to assess the visual acuity; in those patients whose general condition was not conducive bedside visual acuity examination was done. Ishihara plates were used for color vision. Wherever possible slit lamp examinations was done. Tonometry and gonioscopy was done in all possible patients. Special attention was directed towards the assessment of corneal status, pupillary reactions, fundus evaluation and ultrasound b-scan evaluation for posterior segment pathology, imaging techniques like X-RAY,CT or MRI scans were followed whenever necessary. Patients who had multiple injuries were advised admission for further evaluation. Patients were advised to come for follow up one week after their first consultation and examinations. Whenever necessary, opinion from specialties like neurosurgery, plastic surgery, ent, orthopedics and dental surgery were obtained.

One hundred and sixty four patients who sustained head injury with ophthalmic manifestations, presented to our department were taken up for this study. 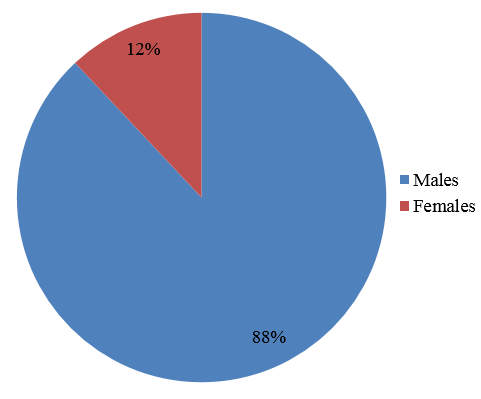 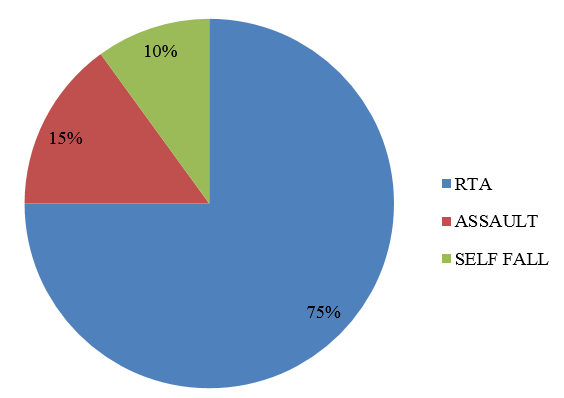 The common mode of injury was by road traffic accidents seen in 123patients, assault was seen in 24 patients and 17 patients had accidental fall. Within group of two wheelers users only 13 patients were using helmets and 94 patients did not wear helmets.

Of the total cases, hyphaema was seen in 5 cases. Traumatic uveitis in 12 and vitreous in anterior chamber was seen in 2 cases.

7 patients had macular edema, Berlin’s edema was seen in 3 patients, vitreous hemorrhage in 4 patients and retinal tear was present in 2 cases. 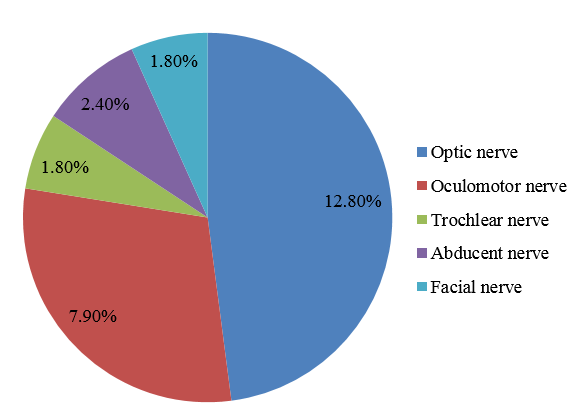 Among the 164 patients 38 patients had lateral wall involvement followed by involvement of roof of orbit in 26 patients and floor of orbit involvement accounting for 15.2% cases and 12 patients were having combined features (fractures).

Out of the 82 patients who had Ct findings, 41 had brain hemorrhage. Aamong them 14 had subdural hemorrhage and 13 had subarachnoid hemorrhage. 26 cases were found to be having isolated skull fracture.

In the evaluation of 164 patients who had head injury with ophthalmic manifestations, a wide spectrum of ophthalmic manifestations were found in this study, Most of the patients in this study were males who constitute 87.8% and females were 12.2% with a male female ratio of 7:1. Many of the head injury patients were young adult males5 and they were in the age group of 21-40 years This data is compared with study carried out by R.Gupta et al.6 Where also males dominate by 81.6% compared to females who constitute 18.4%. Involvement of left eye was more in this study which amounts to 69.5%, right eye 25.6% and 4.9% of patients had bilateral ophthalmic manifestations.7 In a study done by Hendge et al, Perel et al8 62% of cases had left eye involvement and 35% of the patients had right eye involvement and 3% of the patients had bilateral involvement. The most common cause of head injury in this study was Road traffic accidents(RTA) accounting for 75% followed by assault which accounts for 14.6%.8 Corrneal tear was found to be present in 2.4% of the study group, while 1.2% of the patients had exposure keratitis.9 Similarly vitreous hemorrhage was found to be present in 2.4%of patients. Among the patients with head injury, traumatic optic neuropathy was seen in 12.8%.10, 11, 12 and almost similar reports are seen from the neuro ophthalmic studies done by Sabates et al.13 Smith et al and Ciuffreda et al.14 Lateral wall fracture which was the most common wall to be fractured was seen in 23.2%.15

In the present era of supersonic world the increased incidence of head injury and its associated problems had prompted us to take up this study. Even though the very first goal in treating the head injury patients might seem to be the life saving measures, the treating surgeons should aim at preserving vision. The common mode of head injury is Road traffic accident which has been associated with considerable morbidity and these lead to visual loss in considerable percentage of patients. Precautions and preventive measures could be taken that may reduce these kind of morbidities drastically.

So ophthalmic manifestations in patients with head injuries should be properly evaluated and carefully monitored and managed. That shall go a long way in preserving the sight as well as the precious life of the patients.