Divya BM, Shylashree, and Mani: Hypercalcemia of malignancy in metastatic adenocarcinoma of left lower eyelid - A report of a rare case

Adenocarcinoma of eyelid is a rare disease with an incidence of 1 to 5.5% and is considered to be the most common eyelid malignancy following basal cell and squamous cell carcinoma. The symptoms usually present as swelling, thickening, change in appearance of the eyelid skin and ulceration. Various treatment modalities include surgery, radiation or chemotherapy relying upon the stage of tumor at the time of presentation. However, metastasis of adenocarcinoma of the eyelid to other organs is quite rare. We are presenting a case of a 35 year old male who initially presented with complaints of watering in the left eye and in due course, was diagnosed with adenocarcinoma of eyelid which was being treated and eventually progressed to lung and skeletal tissues.  This gentleman also had severe Hypercalcemia which was secondary to paraneoplastic syndrome.

Approximately, 5 to 10% of all skin cancers and 15% of all tumors of the face occur on the eyelid.1 Sebaceous gland adenocarcinomas have a preponderance for the periorbital area, usually the eyelid, as in this case. This may be due to a large number of sebaceous glands in the tarsus and surrounding areas and all these sites are capable of being affected.2 They may be difficult to diagnose due to the ability of the tumor to mimic various benign and malignant entities and for aggressive local behavior and metastatic potential. The first series on eyelid sebaceous carcinoma was presented in 1956 by Straatsma which comprised 16 patients.3 Although rare, sebaceous gland adenocarcinomas are known to metastasize to various organs as in this case but the association of a paraneoplastic syndrome of hypercalcemia with above said metastases is curious and has seldom been documented in literature

We are presenting the case of a 35 year old male, whose symptoms started at age 30(in 2015), when he had complaints of persistent watering of the left eye for almost 2 months for which he was evaluated initially and managed conservatively without any further work up. However, due to the persistent nature of his complaints and the appearance of mild swelling of lower eyelid he was further investigated, biopsy of eyelid was done, histopathology examination revealed it to be a poorly differentiated carcinoma and was diagnosed to be sebaceous carcinoma after microscopic and Immunohistochemistry examination.

Post diagnosis, this patient underwent Dacryocystorhinostomy and neo adjuvant chemotherapy with Cisplatin 50 mg and 5 Fluorouracil 1900 mg for two cycles along with supportive care. A repeat biopsy of the lower eyelid was done and the specimen showed residual viable tumour with features of moderately differentiated adenocarcinoma with focal sebaceous and squamous differentiation with no evidence of spread. Following the procedure and chemotherapy, he improved symptomatically and was discharged with a plan for surgical local therapy in view of good response to neoadjuvant chemotherapy, however the patient denied further interventions.

At the age of 34 (2019), he had complaints of pain and watering of the eye and upon further investigation, CT orbits with contrast showed ill defined, heterogeneously enhancing soft tissue density lesions in the canthus region. Additionally, Magnetic Resonance Imaging (MRI) of brain and orbits showed ill-defined enhancing soft tissues arising from left lower eyelid causing erosion of left orbit floor and anterior wall of left maxillary sinus with extension to extraconal compartment of left orbit and left maxillary sinus. He received a second line of consolidated chemotherapy with carboplatin 100mg, 5-fluorouracil 750mg and nab paclitaxel 100mg for six weeks. Reassessment with PET CT was suggestive of disease progression for which he underwent local excision, orbital exenteration, right superficial parotidectomy with Anterolateral Thigh free flap reconstruction. Post-surgery he continued to receive chemotherapy with carboplatin 200 mg for four weeks along with three phases of radiotherapy with a dose of 41.4 Grays in 23 fractions, 26 Grays in 13 fractions and 22.5 Grays in 10 fractions respectively. Reassessment PET scan showed multiple necrotic mediastinum ground glass density nodules in bilateral upper lobes. Biopsy of the lymph nodes showed the same histology (sebaceous carcinoma) as that of primary origin.

At age 35, he presented to our institute with complaints of disorientation and severe dehydration for five days before admission. Investigations revealed acute renal dysfunction (Sr. creatinine- 1.8mg/dl), hypokalemia (2.9 mmol/L), hypercalcemia (I.ca- 11.5 mg/dL, total ca- 19 mg/dL). He was treated with Inj Denosumab 120 mg, adequate hydration, Inj. Dexamethasone and antihypercalcemic measures with IV Salmon calcitonin 200 mg thrice daily. Even though his renal parameters and calcium levels improved over the next 24 hours poor prognosis was explained and was started with third line chemotherapy.

When the patient was due for third line chemotherapy (January 2021), he was admitted again with severe breathlessness and cough. Laboratory investigations showed elevated levels of Alkaline Phosphatase (194 U/L) and gamma glutaryl transferase (124 U/L). The pleural fluid was found to be positive for malignant cells. CT scan showed bilateral hilar and mediastinal lymph node mass (Figure 1) along with right pleural effusion and pericardial effusion (Figure 2). Cytopathology report showed few atypical cell clusters suggestive of metastatic adenocarcinomatous deposits. Patient’s malignancy progressed despite the third line of chemotherapy. Unfortunately, he succumbed after receiving two cycles of nivolumab and one cycle of irinotecan. 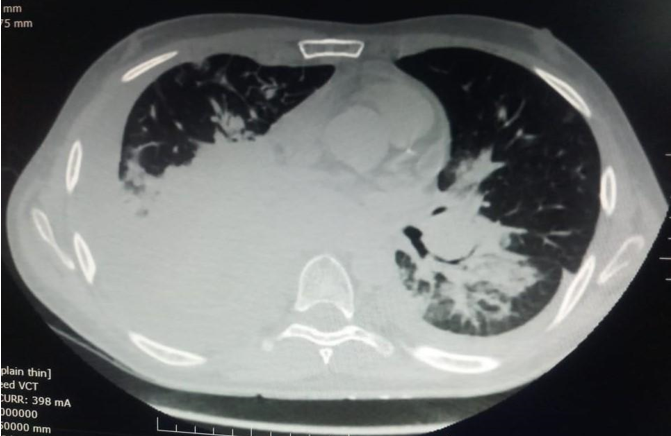 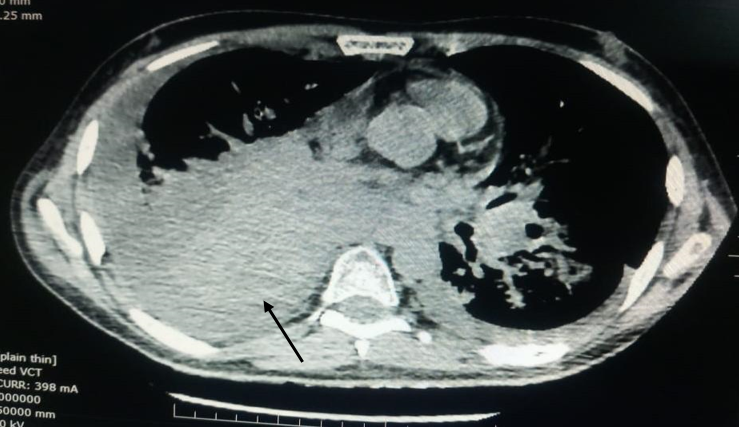 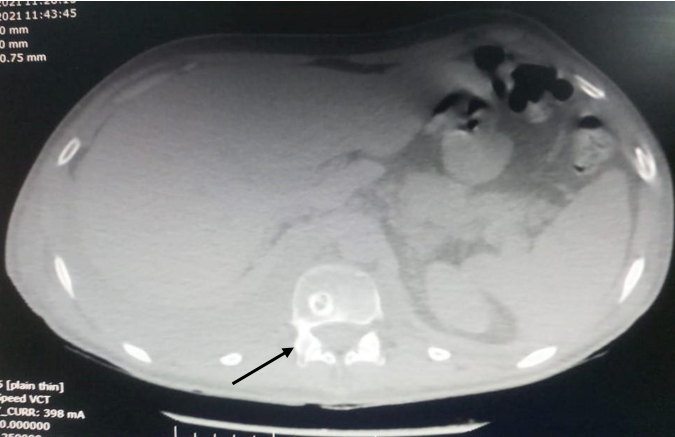 Incidence of eyelid adenocarcinoma is about 85% to 95% among non-Asian countries with basal cell skin cancers. However sebaceous cell carcinoma constitutes about 67-77% in Asian countries.4 70% of these cases occur in the lower eyelid which may also occur in the inner corner of the eye, the upper lids, and the outer corner of the eyes.5, 6 These carcinomas are rarely malignant. However very few cases of metastatic sebaceous carcinoma of the eyelid have been reported. One such case was reported by S Koyama et al which was similar to our case study.7

Symptoms include change in appearance of the eyelid skin, loss of eyelashes, swelling and thickening of the eyelid, chronic infection, watering and ulceration on the eyelid which does not heal, flat skin-colored or brown lesion. Similarly, in our case the patient presented with persistent watering of the left eye which was being treated symptomatically and took a period of three months to diagnose as metastatic disease. Treatment options include surgical therapy, radiotherapy, chemotherapy or targeted therapy depending on the stage of the tumor. Wide excision is prioritized in early stages. Surgical treatment ranges from local excision to orbital exenteration. However, in the advanced stage, multimodalities will be an add-on to the survival benefits to the patients.

Our case report is one of a kind as the various paraneoplastic syndrome associated with this type of tumor is extremely rare and not documented as per literature. In contrast, hypercalcemia of malignancy has the highest incidence in primary tumours of breast, lung and multiple myeloma having 2.5%-12.5% in lung carcinoma. 9 Studies have shown that malignancy related hypercalcemia occurs in 10% to 30% of patients during their disease course, 80% occurs in adenocarcinoma (lung, esophagus and cervix) as a consequence of release of parathyroid hormone (PTH)–related protein (PTHrP) by cancerous tumors and has 50% mortality within 30 days.10 In the case of our patient, it is highly probable that the hypercalcemia was due to PTHrP rather than bone metastases. His PTH level was normal. Additionally, he did not have a history of hypercalcemia prior to his cancer diagnosis and no past recordings of elevated PTH. There is no evidence to suggest an infectious/granulomatous etiology like tuberculosis or sarcoidosis as a cause as is evidenced by the chest CT.

Bisphosphonates are the standard treatment for HCM and is a newer approach for bone metastasis. However, the patient was treated as per the standard guidelines consisting of aggressive intravenous rehydration and calcitonin.11

Although there are cases of metastatic sebaceous carcinoma of eyelid, we report a rare case of severe hypercalcemia of malignancy which seldom occurs in those cancers which are adenocarcinomatous in nature. Despite the patient receiving multimodality treatment, we could not salvage his life due to the advanced stage of the disease and poor prognosis.

We would like to highlight that a high index of suspicion is needed to diagnose hypercalcemia in patients with active malignancy. Any cancer patient with altered sensorium should be evaluated for calcium disorders along with the rest of the causes for encephalopathy. Prompt diagnosis is essential and recovery of the patient from this correctable entity is a very rewarding entity for the physician.