Here with presenting a case of pseudotumor orbit initially diagnosed as orbital cellulitis which responded to steroids. A 44 year old male presented with complaints of swelling, redness, watering and inability to open the right eye for 1 day. He had no h/o trauma or insect bite. On examination, visual acuity in both eyes was 6/6. The right eye was proptosed with gross restriction of the extra ocular movements, conjunctival congestion and chemosis. The intra ocular pressure was 52 mm Hg. The left eye was normal. CT orbit showed enlargement of right lateral rectus muscle and lacrimal gland, with fat stranding and soft tissue thickening of periorbital, pre septal and perinasal regions diagnostic of pseudotumor tumour. He was started on high dose oral steroids with which he improved dramatically.

Birch-Hirschfeld gave the specific term ‘pseudotumor’. He changed Panas’ term malignant pseudoplastic into inflammatory orbital pseudotumor to describe the mass in the orbit which was clinically mistaken for a neoplasm that was histologically inflammatory nature. Idiopathic orbital inflammatory disease (IOID), also called non-specific orbital inflammation or orbital pseudotumor is an uncommon disorder that is characterized by non-neoplastic, noninfective, space-occupying orbital infiltration with inflammatory features. This disease is marked by a polymorphous lymphoid infiltrate with fibrosis of a varying degree, without any known local or systemic cause.1 The clinical diagnosis is one of exclusion with evaluation directed towards excluding neoplasms, infections, and systemic disorders. IOID accounts for 4.1−6.3% of orbital disorders and most commonly occurs in the adult population.2 IOID is diagnosed by clinical history and evaluation to rule out other causes of orbital disease. Some cases of IOID may mimic some of the common conditions such as orbital cellulitis and thyroid eye disease, so it should be considered as a diagnosis of exclusion, with an evaluation that is directed towards eliminating the other causes of orbital disease. Orbital Magnetic Resonance Imaging (MRI) is the single most important diagnostic test, but serological studies and incisional biopsy may be necessary to exclude a systemic cause.3 Biopsy samples can be taken for those cases with multiple recurrences, or those who are unresponsive to therapy. Corticosteroids have been the mainstay of therapy in IOID and are tapered over several months to assure remission. Radiotherapy may be used in patients who fail to respond to steroids or who have a rapidly progressive course.3 For the patients who are refractory to both corticosteroids and radiotherapy, various reports have suggested the use of chemotherapeutic agents such as methotrexate, cyclophosphamide, and cyclosporine.3

A 44-year old male presented with the complaints of swelling, watering, redness, inability to close the right eye with associated diplopia on attempted opening of the right eye for one day. He had no h/o trauma or insect bite. He had no similar history in the past. No known comorbidities or symptoms suggestive of hyperthyroidism. No significant personal or family history.

On examination, vitals were stable. Systemic examination was within normal limits. There were no signs of hyperthyroidism. On day 1, his visual acuity in both eyes was 6/6. The intraocular pressure of the right eye was 58mmHg and the left eye was 14mmHg.On examining the right eye there was facial asymmetry showing periorbital oedema with complete mechanical ptosis, fullness of superior and inferior sulcus with no palpable mass. Hertel’s exophthalmometry of the right eye was 24mm and left was 20 mm. On primary gaze, 15-degree hypotropia on Hirschberg’s test was noted. Extraocular movements of Right eye movements were grossly reduced in all directions of gaze. The anterior segment examination of the same eye showed chemosis and diffuse conjunctival congestion. The anterior chamber was quiet, with no cells or flare. The rest of the anterior segment was within normal limits. (Figure 1) The B-scan of the right eye showed lateral rectus muscle enlargement. (Figure 2) The left eye was within normal limits. The fundus of both eyes was normal. A clinical diagnosis of orbital cellulitis was made and the patient was admitted to the ophthalmology ward. Investigations revealed a normal complete blood count, kidney and liver function tests. Urine analysis was within normal limits. ECG, X-ray chest, abdominal ultrasound, and thyroid function tests were normal. He was started on Intravenous Ceftriaxone and Metronidazole and IOP lowering drugs were prescribed. On day 2, there was a very minimal reduction in the swelling, and the other anterior segment findings persisted, the intraocular pressure reduced to normal, 21mmHg. As the patient appeared to be responding to intravenous antibiotics, the same treatment was continued. However, it was noted that the patient had been afebrile throughout and blood counts were normal. There was no obvious cause for orbital cellulitis. On day 3, there was no significant improvement in the symptoms and signs, so CT orbit was done which showed proptosis of the right eyeball with soft tissue thickening and fat stranding in right periorbital and pre septal regions, bulky right lateral rectus muscle, and lacrimal gland diagnostic of right pseudotumor orbit. (Figure 4). Given these findings and the minimal response to IV antibiotics, a diagnosis of pseudotumor orbit was made and the patient was started on high dose oral steroids – Tab. Prednisolone 100mg OD. On day 4, the patient drastically improved with steroids. periorbital edema, conjunctiva congestion, and chemosis resolved completely. The axial proptosis reduced to 21 mm from 24mm by Hertels Exophthalmometry. Extra ocular movements were full in all directions except on elevation with -1 restriction. The rest of the anterior segment was within the normal limit. (Figure 5) The patient was discharged with a tapering dose of steroids and reviewed after 4 days, his condition resolved completely. (Figure 6) 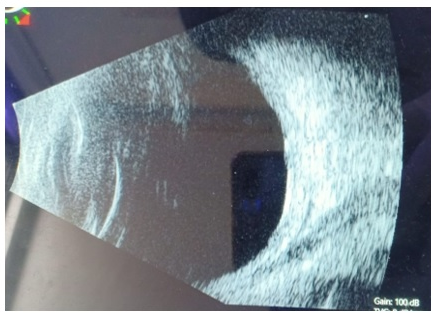 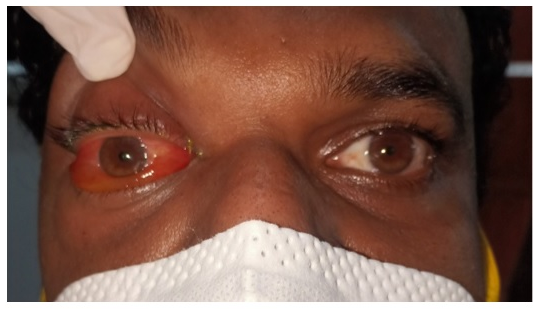 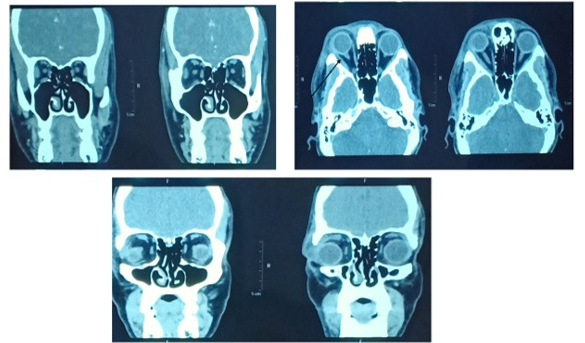 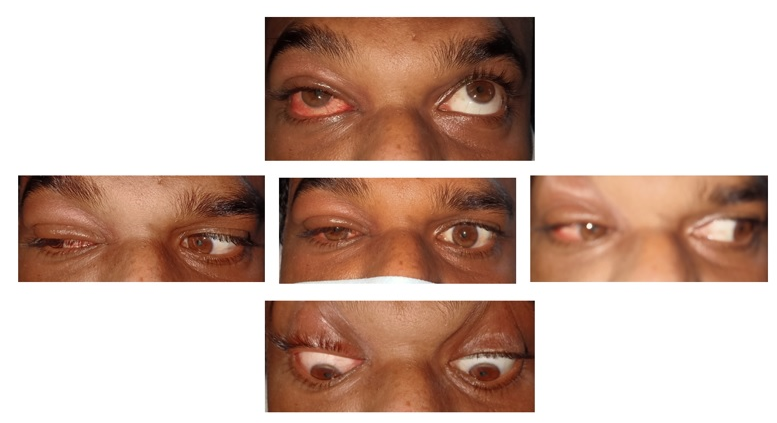 Orbital pseudotumor is a benign, non-inflammatory condition of the orbit with no identifiable systemic or local causes. It was first described by Gleason in 1903 and later characterized as a specific clinic pathological entity by Birch-Hirschfeld in 1905.4 The mean age at presentation was 45 years.5 It accounts for 4.1. −6.3% of orbital disorders. The exact etiology of idiopathic orbital inflammation is not known but immune-mediated processes, as well as infectious, have been postulated. Several histopathologic classifications have been proposed. Blodi and Gass presented 9 subdivisions of orbital pseudotumor which include, myositis, dacryoadenitis, diffuse lymphocytic infiltration, benign lymphocytic hyperplasia, granuloma, lymph follicles, dense collagen, vasculitis, and miscellaneous. Reese presented 5 subdivisions of IOID: which include focal and perivascular lymphocytic infiltration, early fibrous scar with little inflammation, lymph follicles, diffuse chronic inflammation, and inflammation in the pre-existing vascular lesion. Orbital pseudotumor or IOID is the third most common orbital disease after Graves ophthalmopathy and lympho proliferative disease. IOID may present in an acute, subacute, or chronic fashion. 6 IOID is usually unilateral, but can also be bilateral. The most common differential diagnosis of pseudotumor orbit is orbital cellulitis, thyroid eye disease.7 It is important to make the correct diagnosis as the management of each condition differs. Pseudotumor is diagnosed by exclusion, taking into consideration the clinical history and the orbital imaging. CT/MRI is an important diagnostic tool and in this case, clinched the diagnosis. Serological studies and incisional biopsy may be necessary to exclude a systemic cause but usually are not performed at presentation due to the risk of damage to vital structures in the orbit. Atypical patterns of histopathology such as true vasculitis, extensive sclerosis, tissue eosinophilia or granulomatous inflammation may occur. There is no univocal correlation between clinic therapeutic outcomes and these atypical findings. In the absence of systemic fibro inflammatory, granulomatous, and vasculitic disease, these lesions can still be considered to belong to the spectrum of orbital pseudotumor. The ocular manifestations of pseudotumor orbit may include periorbital edema, ptosis, proptosis, pain with eye movements and diplopia. Other unusual clinical presentations of pseudotumor orbit include cluster headache, cystoid macular edema, and temporal arteritis. Pseudotumors may occur in all sites of the body, but histologically they have little in common with their orbital counterparts. The pathogenesis remains elusive and the role of infection, autoimmune disorders, and aberrant wound healing need further investigation. The presentation may occur over weeks which is subacute or it may present insidiously over a period of months which is chronic. Paediatric pseudotumor orbit presents with swelling and local pain where proptosis is the most common clinical feature. Paediatric orbital pseudotumor is differing in number of features from the adult presentation. Bilateral manifestation, uveitis, disc oedema, and eosinophilia are more common in the paediatric population. Uveitis in particular, when present, appears to portend a poor outcome in the paediatric orbital pseudotumor. Seasonal associations have been reported, with recurrences or exacerbation of symptoms in the cooler months6 Sonia et al reviewed 65 patients and showed periorbital oedema and pain were the most common clinical features and were observed in 45(69%) and 49(75%) patients.5 Imtiaz et al reviewed 1264 patients suspected orbital mass cases from Wills Eye Hospital, Philadelphia, USA and found inflammatory lesions in 11% of the histopathologically proven lesions.8 Orbital pseudotumor is often subclassified based on the target areas within the orbit which presents clinically as a dacryoadenitis, a myositis, a trochleitis, superior orbital fissure syndrome and Tolosa Hunt syndrome or as a diffuse anterior soft-tissue inflammation.6 Systemic corticosteroids remain the mainstay of treatment and must be given in high doses. Swamy et al reviewed 24 patients with biopsy-proven cases of IOID and found that the lacrimal gland was affected at 54.2%, extraocular muscles 50.0%, orbital fat 75.0%, sclera 4.2%, optic nerve 20.8% and other 8.3%.1 Corticosteroid administration is always the cornerstone treatment of this condition. Other therapies with good prognosis include cytotoxic agents, immunosuppressants, IV immunoglobulins, TNF-alpha inhibitor, monoclonal antibody and Mycophenolate Mofetil, which inhibit de novo purine synthesis and prevent B & T lymphocyte replication.9, 10 Over the past half a century, curcumin (diferuloylmethane) which is a component of the golden spice turmeric (Curcuma longa),helps in modulating multiple cell signaling pathways in treating this kind of pro-inflammatory diseases.11 A report suggested CyberKnife radiosurgery and Rituximab which resulted in symptomatic resolution, motility, improved eyelid closure and almost complete radiographic regression of his disease process which was maintained up to 18 months of the follow-up period.

It is important to investigate the patient fully and confirm the diagnosis of patients who present with proptosis, chemosis, ptosis, diplopia, restricted extra ocular movements, as high dose steroids are given to treat pseudotumor orbit. Differential diagnosis of orbital cellulitis and thyroid eye disease must be ruled out before giving high dose steroids. Our patient had dramatic improvement due to the rational use of high dose steroids.