Observation: We report a case of a sixty-five-year-old female who presented to the ophthalmology outpatient department with the chief complaint of a rapidly growing mass on her left upper eyelid for 6 months interfering with her vision. Physical examination revealed a firm mass of size 3.5 cm x 3 cm x 2.5 cm. RT-PCR for COVID-19 was done and found negative. Routine blood investigations, blood sugar levels, viral serology, chest X-ray were done. Excision and biopsy with wide margins at the base were performed under local anesthesia. Histopathological examination of the specimen showed well differentiated squamous cell carcinoma. The patient responded satisfactorily.

Conclusion: Early diagnosis and treatment reduce the morbidity and mortality of the patient.

Squamous cell carcinoma is a type of invasive malignant tumor which arises from the squamous cell layer of the epidermis.1 When it occurs in the ocular and periocular region, it can involve structures like conjunctiva, cornea, and eyelid.

Squamous cell carcinoma is the second commonest malignant tumor of the lid. 2 It commonly arises from the lid margin in elderly patients de novo or from pre-existing lesions like actinic keratosis, Bowen’s disease, radiation dermatosis or immunosuppressive drugs. 3

The gold standard to diagnose squamous cell carcinoma is full thickness biopsy as it will determine the depth and extent of invasion of the cancer. Fine needle aspiration cytology can determine if cancer cells have spread to lymph nodes in patients with lymph node enlargement.

We report a case of an elderly female presenting with left upper eyelid mass which was examined and then completely excised and on histopathological examination turned out to be well-differentiated squamous cell carcinoma.

A sixty-five-year-old female presented to the ophthalmology outpatient department with the chief complaint of a rapidly growing mass on her upper eyelid of left eye for 6 months.

On elaborate history taking from the patient, we found that the mass was initially the size of a pea but rapidly increased to its current size over a period of just 6 months. There was no history of associated pain or bleeding from the mass. There was difficulty in seeing from the left eye due to the mass obscuring her left eye visual axis (Figure 1).

Ocular examination revealed a firm mass of size 3.5 cm x 3 cm x 2.5 cm involving left upper eyelid margin. It was non-tender and did not bleed on touch however brown and black hemorrhagic areas were seen on its outer surface (Figure 2). She was pseudophakic in right eye and phakic in left eye with visual acuity of 6/12 and 6/18 in right and left eye respectively. Fundus examination of both eyes showed normal retina.

On general physical examination, no lymphadenopathy or organomegaly was noted. Her systemic examination results were within normal values and revealed no chronic illness.

Post-operatively there was some edema over the wound site and she was prescribed topical and systemic medications. From post-operative day one the patient got relief and she could see directly from the left eye. Histopathological examination of the specimen showed well differentiated squamous cell carcinoma (Figure 5). Margins were free from tumor.

Written informed consent was taken from the patient before the surgical procedure and also for the publication of her case and her images in an article, journal or anywhere else. 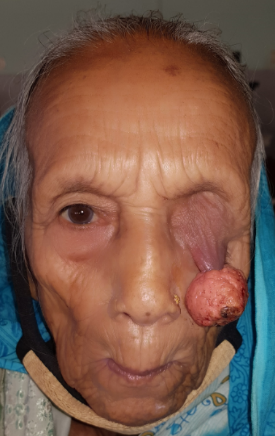 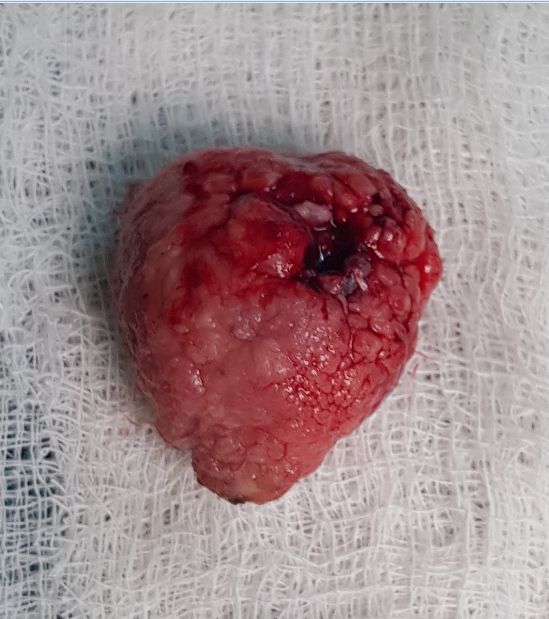 Following surgical excision of the mass and suturing on postoperative day one. 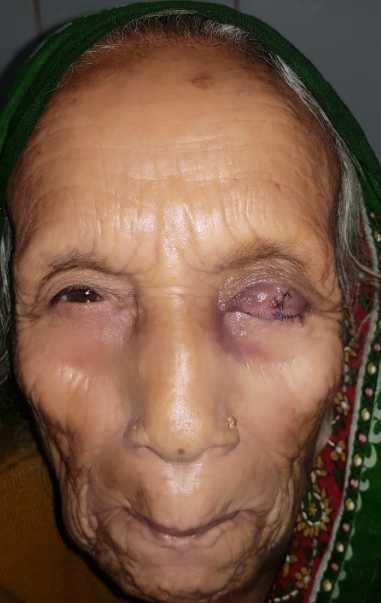 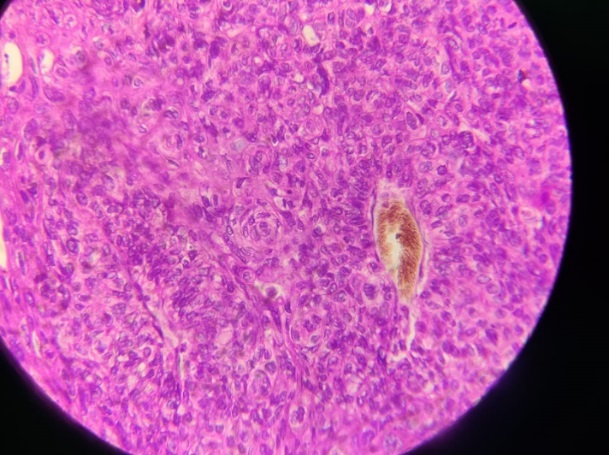 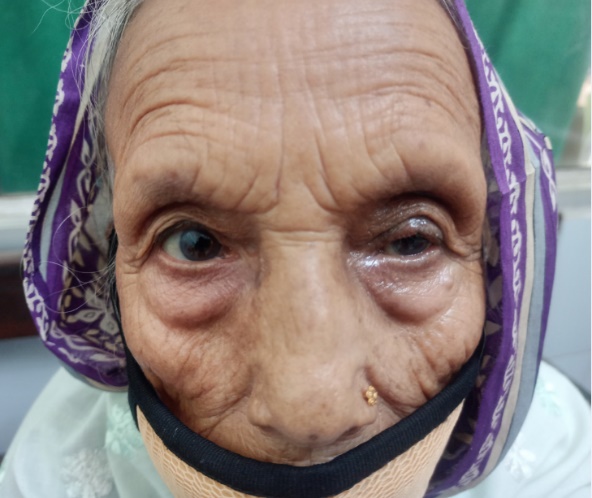 Squamous cell carcinoma is an aggressive tumor and incidence of eyelid squamous cell carcinoma has been reported to be between 0.09 and 2.42 cases per 1,00,000 population and being more prevalent in males, in the lower eyelid (mainly in the medial canthal region), in fair skin people, and in countries with high ultra-violet light exposure. 4

There are certain methods of prevention, such as by minimizing sun exposure, appropriate use of sunscreens, mainly in childhood and adolescence. Such preventive measures can certainly help in minimizing the morbidity and mortality of this disease by reducing its incidence.

Eyelid squamous cell carcinoma can occur at various sites most commonly on the lower lid but can also occur on the upper eyelid, area surrounding medial or lateral canthus of eye, eyebrow, or near eyelid skin, that is periocular region. It can appear as a painless swelling, as a nodule which can have some ulceration in the center of the growth or even without ulceration. Sometimes there can be an indentation or erosion of the skin or eyelid margin rather than having a nodule. The squamous cell carcinoma can be very lethal, so a wider excision of the tumor is advised, than that advised for basal cell carcinoma. Frequent follow-up postoperatively is also very essential. The literature suggests that there is high risk of residual tumor and also of recurrence in patients who caused delay in seeking medical care after the tumor first came into notice.5

Squamous cell carcinoma can lead to a rare complication, that is orbital invasion. If it is present and recognized early, can be treated effectively and efficiently with orbital exenteration surgery. Thus, dreaded central nervous system dissemination can be prevented. As the presentation of the tumor varies and histological examination is absolutely necessary for correct diagnosis, any suspicious lesion of the eyelids should undergo excision and biopsy. It should be properly explained to each and every patient with eyelid squamous cell carcinoma the risk of recurrent or new tumors arising later on in life and so all patients are encouraged to get lifelong follow-up.

Treatment of eyelid tumors is varied and a lot of choices are present, the choice to follow is depending on the pathological process present. It includes: surgical excision, cryotherapy, radiotherapy, electrofulguration, topical application of 5-fluorouracil, intralesional bleomycin, corticosteroid therapy or other different techniques depending on the position and mainly the size of the lesion. Interferon infiltration has also been used intralesional along with laser surgery and photodynamic therapy. 7 The advanced and extensive squamous cell carcinoma require systemic neoadjuvant chemotherapy or palliative chemotherapy.8, 9

Although there have been very few studies that compare the efficacy of these treatments, the surgery and radiotherapy seem to be the methods more effective, and surgical treatment is the procedure with the lowest rate of recurrences.10

The various techniques used in the treatment of eyelid tumors can lead to a good cosmetic and functional result. Depending on the location, size and severity of the tumor, the results may range from a small scar to permanent changes in the structures of the eyeball.10

Eyelid squamous cell carcinoma is comparatively rare but fatal if not detected and treated timely. It leads to substantial morbidity and mortality, but if detected early and treated than it has good prognosis. So, the morbidity and mortality can be reduced to a great extent.11 Any suspected lesion on the eyelids should be evaluated and excised or biopsied. Recurrence though rare but regular follow up is advised to look for recurrence or new lesions.12

In our case the large size of the tumor and its unique way of presentation on the upper eyelid was a rare scene. The mass was hanging down from the upper eyelid and completely obstructing the vision in the left eye. So, it was our aim to surgically excise the whole tumor and give the patient some relief and so that she can live life disease free. This case is reported to show such large squamous cell carcinoma which is not very commonly seen in recent published literature.

The patient presented to us with a large size tumor after having it for a long time due to ignorance and lack of awareness of cancerous growth in the body. Early diagnosis and treatment reduce the morbidity and mortality of the patient. It is important to consider the possibility of cancerous lesions in addition to benign conditions.